« On the Visual Thesaurus: Television, in Other Words | Main | To Name a Hawk »

But it appeared as early as the afternoon of December 2 in a tweet by a conservative commentator (and “freedom enthusiast,” according to her Twitter bio), Kristina Ribali:

I really never thought I'd see the day when prayer shaming was a thing in America.

Ribali may have been referencing, among other things, a tweet by George Zornick, the Washington editor of the liberal publication The Nation, which was retweeted almost 5,500 times.

The Daily News of New York, which also leans left, made a stark statement on the front page of its December 3 edition: 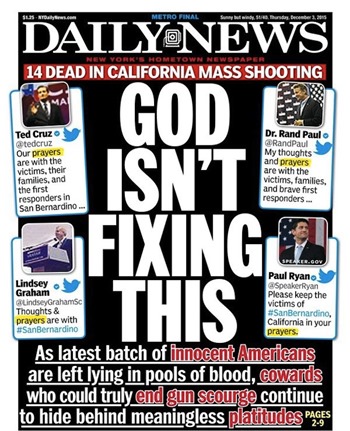 Igor Volsky, an editor at Think Progress, kept up a steady Twitter stream contrasting politicians’ “thoughts-and-prayers” tweets with the dollar amounts the politicians had received from the National Rifle Association. Here’s his response to a tweet by Texas Congressman Louie Gohmert:

Got $1,000 from NRA during the 2014 election cycle, so praying is about all you'll do to prevent gun violence https://t.co/fIeSsQRqrH

This week’s prominent “prayer shamers” aren’t really against prayer. They’re against platitudes. The problem is when “thoughts and prayers” are the only response to a public event that calls for political action 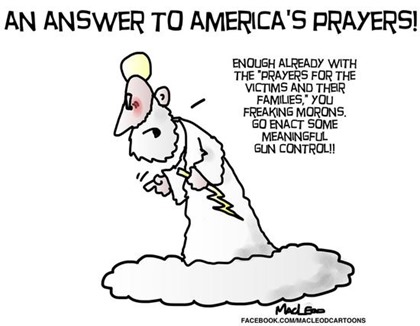 Cartoon by James MacLeod for Patheos.

On December 4, Esquire contributor Charles P. Pierce cited Matthew 23:23 – the passage about whited sepulchres – to make his point that Jesus himself was something of an expert at prayer-shaming.

And on December 5, Republican presidential candidate Ted Cruz referred to the Daily News headline in a speech to an Iowa audience:

“They’ve invented a new term for that, they call it now prayer shaming. Well let me tell the Democrats. Let me tell the mainstream media. Although I repeat myself, There has never been a time in the history of this country that we needed prayer more.”

Prayer-shaming is the latest -shaming compound to hit a popular nerve. Earlier this year, Californians indulged in – or deplored – drought-shaming. There’s a popular Facebook page and Twitter account called Passenger Shaming, launched in January 2013, that compiles photos of badly behaving airline passengers. Also in 2013, fat-shaming entered Urban Dictionary. And I mentioned slut-shaming in my 2012 words-of-the-year roundup, under slut. If there were to be a Suffix of the Year competition, I’d shamelessly nominate -shaming for this year’s top honor.

Posted at 07:07 AM in Current Affairs, Religion, Suffixes, Word of the Week | Permalink