« The Airing of Grievances | Main | Words of the Year 2015: Fritinancy Edition »

Friedland’s witty and informative little lexicon credits a January 31, 2002, article in the Daily Mail (UK) with coining Janopause. The article’s headline makes the derivation clear: “Janopause! It’s Worse than the Menopause – a Month without Alcohol – but Now, at Last, It’s Over.”* Janopause goes by other names, including Dry January, Drynuary, and, in Finland, tipaton tammikuu, or “dropless January.”

Proponents claim that a month of abstention can have health benefits that include weight loss, lowered cholesterol and glucose levels, and increased alertness. Skeptics, including the British Liver Trust, counter that detoxing for just a month is “medically futile” and may even “do more harm than good” because it creates a false sense of security.

In a 2012 article, The Daily Beast weighed the arguments and concluded with this medical opinion:

Rather than giving up cold turkey (or, for that matter, Wild Turkey), Tram Tran, M.D., medical director of the liver-transplant program at Cedars-Sinai Medical Center, advocates moderation throughout the year. “If you’ve binged over the holidays, cut back to moderate drinking, which means two or less drinks a day for a man and one or less for a woman,” she says. “But, if you’re a regular social drinker, you’re not going to see immediate benefits if you stop for four weeks. It will take months to see improvement in liver inflammation and nutrition.”

If you enjoy learning words like Janopause, I encourage you to pick up a copy of Eatymology, which is well researched and annotated (in endnotes, thankfully), and in whose pages I was pleased to see some of my own favorite words, including cherpumple, hyperpalatable, and growlette. 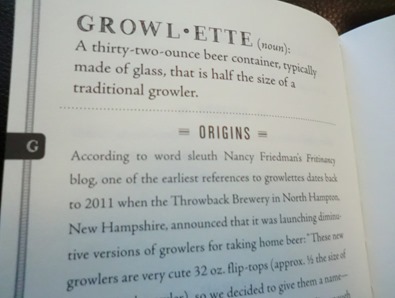 I also learned a bunch of new terms, among them fat washing, egotarian cuisine, spoofulated, and sourdough hotel.

* For a discussion of British the menopause vs. American menopause, see this 2007 post in Separated by a Common Language.