The phenomenon of the hot take, if not the term itself, originated in sports journalism, as explained by Tomas Rios in an August 2013 article for Pacific Standard:

Writing a hot take is simple. Start with an easy target—any athlete accused of doing anything “bad” will do—channel the aggrieved, paternalistic wails of your least favorite news anchor drunk on paranoia and privilege, dismiss nuance and insight at every opportunity, and close with some nonsensical pap about tradition, or responsibility, or America.

Rios traces the hot take back to Dick Young (1917-1987), a New York sportswriter who attacked athletes’ drug use, mocked soccer as a “foreign sport,” and called the boxer Muhammed Ali by his birth name, Cassius Clay:

The most obvious legacy Dick Young left sports writing is the idea that it’s a sports writer’s job to serve as the self-appointed moral arbiter of sports. The hot take was Dick’s baby, and it’s grown into the vile thing we now know it to be.

With the ascent of short-form social media and high-volume, short-deadline online journalism outlets such as Buzzfeed has come a corresponding rise in hot takes. “The ‘we need to have something on this’ impulse leads to the worst (professional) writing on the web,” Alex Pareene (now editor-in-chief at Gawker) wrote in September 2014. In December 2014, New York magazine included hot take in a Twitter glossary:

The latest indictment of the media's unraveling (by the people creating the media) is disparaging the "hot take." Hot takes are controversial angles on otherwise boring stories. Think Slate pitches or people who are constantly trying to capture the male point of view on women's issues. You can seriously have a hot take, you can jokingly have a hot take, and you can ironically have a hot take. Is writing a bajillion words about the inside jokes a swath of people used on Twitter a hot take? Maybe. Or maybe it's just garb.

.@iam486 & @emofly sent this to staff earlier today about why we changed a post: We are trying not to do hot takes pic.twitter.com/bgVdxOR3Uh

A few days later, the New Republic’s Elspeth Reeve published a history of the hot take:

[T]he true hot take is a piece of opinion journalism hastily written in a scolding tone, often by older men … who have achieved enough status in media that they don't have to work so hard anymore. There's a “just telling it like it is” attitude, even if, according to the best available data, it is not like that at all. “It's a useful phrase to describe a scourge that became a scourge almost as quickly as it became widespread,” Gawker editor-in-chief Max Read said. “It's the perfect media phrase because it allows the person who uses it to 1) dismiss something 2) contemptuously using 3) a bit of insidery jargon.”

For a take to be truly hot, “it’s not necessarily intentionally contrarian, but it is written in such a way that you can tell it’s a bit of a troll,” The Washington Post's Philip Bump said. “There’s an implied artificiality to it. And also, it’s a crappy piece.”

“Way back before ‘hot takes’ were in politics, political reporters would link to each other's work and earnestly say ‘smart take,’” [Alex] Pareene said, noting a 2013 Gawker post titled “Word Terrorism: When ‘Smart Takes’ Aren't.” Once that phrase became sarcastic, “the smart take married the sports hot take, and the rest was history.”

The hot in hot take may connote any of the word’s many meanings: excited, intense, angry, sexy, fresh (“hot off the presses”; “in the heat of the moment”), topical, controversial.

@Fritinancy For me, it's fresh. Like a cow patty.

(Grant Barrett is co-host of public radio’s “A Way with Words.”)

The sense of take as “an individual’s interpretation or assessment of a person, thing, or situation” is relatively recent; the OED’s earliest citation is from a mystery novel published in 1977. It may owe something to the moviemaking sense of take – a sequence recorded in a single continuous period of filming – which dates back to 1918 or earlier.

The precise meaning of hot take is variable. Last month Jonathan Chait, a writer for New York magazine, took umbrage at the labeling (by whom isn’t clear) of a long, researched piece as a “hot take.”

"Hot take" = "any analysis I disagree with." Including a carefully edited 5,000 word essay that took weeks. pic.twitter.com/uw0q6hS5WG

And although hot take is generally considered a disparaging term, in a recent ad Twitter appears to be positing a neutral interpretation. 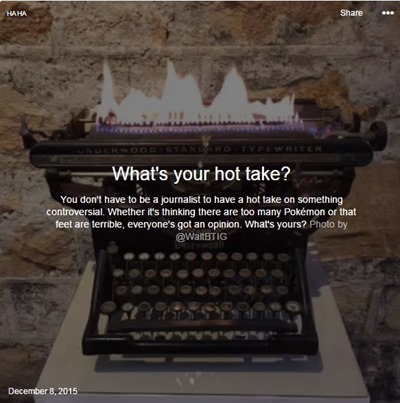 Posted at 09:02 AM in Journalism, Word of the Week | Permalink

And Grant Barrett wins the discussion.