« December Linkfest | Main | On the Visual Thesaurus: Brand Names of the Year »

Birthmas celebrants may feel shortchanged – or even cursed, as a recent AdWeek post put it:

The sound and the fury of December is always deafening: holiday songs on repeat, nothing on TV but saccharine Santa flicks, hand-wringing news reports lamenting the war on Christmas being tirelessly waged by Walmart greeters or Starbucks cups.

So, imagine the frustration for those whose birthdays fall in the middle of this cultural horror show. If these poor souls aren't completely forgotten, they can expect a half-hearted Facebook message at best. There usually aren't gifts—they're promised extra under the tree, but of course, that's never the case. There are no parties, either. No one's in town.

A new line of handmade greeting cards, Gypp’d, targets this niche market. The company’s founders say theirs is “the only card company designed to celebrate all the inconvenient birthdays of the year.” 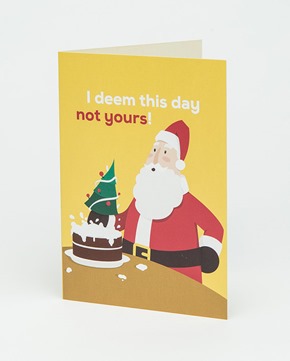 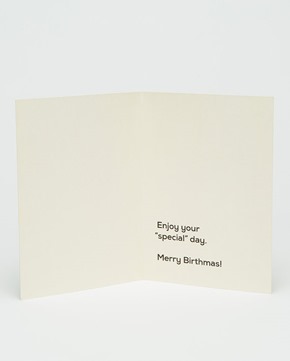 Gyp – to cheat or swindle – is an American English slang term from the 1880s, now considered offensive because it’s probably a truncation of Gypsy (“from prejudiced popular perceptions of the Romani people as thieves and petty swindlers” – American Heritage Dictionary).

The origins of birthmas are uncertain; the earliest Urban Dictionary entry is dated June 27, 2005. It was popular enough by 2009 to be dropped into an episode of “Family Guy,” the animated series that’s been airing on the Fox Network since 1999.

To all of them she dedicated the December Birthday Song, which I pass along to you.

Posted at 05:48 AM in Holidays, Word of the Week | Permalink