American Pharoah. The horse that won the Triple Crown in 2015 bears an inadvertently misspelled name. “That the letters ‘a’ and ‘o’ became transposed from the traditional spelling for an Egyptian ruler, Pharaoh, wasn’t necessarily intended when owner Zayat Stables submitted a name to The Jockey Club.” the Louisville Courier-Journal told its readers in April. Racing manager Justin Zayat said a fan submitted the misspelled name through a contest, but the fan said she’d checked the spelling first. (Anyway, she added, “Horses can’t spell.”) American Pharoah’s sire also had a misspelled (or mis-spaced) name, Pioneerof the Nile – in this case to conform to an 18-character limit.*

*Caitlyn. In June, 65-year-old Olympic decathlete and reality-TV personality Bruce Jenner (né William Bruce Jenner) announced that he was now a woman named Caitlyn. As Laura Wattenberg of the influential Baby Name Wizard blog pointed out, “Caitlyn” (a fancifully spelled variant of “Kathleen”) is more likely to be the name of a 17-year-old than a 65-year-old: “The name didn’t even show up for the first time until decades after Jenner was born ... Caitlyn suggests a generational limbo, a frozen point in time. It isn’t native to Caitlyn Jenner's generation, but neither is it quite of this fashion moment. Jenner has said that she first took steps to become a woman back in the 1980s. I wouldn’t be surprised if she considered the name Caitlyn back then, when it was a fresh new hit, and has been living with it privately ever since.” Cecil. The killing, by an American dentist and bow-and-arrow hunter, of the best-known lion in Zimbabwe’s Hwange National Park, in late June, “drew international media attention and sparked outrage among animal conservationists, politicians, and celebrities,” according to a Wikipedia entry. Cecil had been named after Cecil Rhodes, the British imperialist who also gave his name to the Rhodes Scholarship and to Rhodesia, Zimbabwe’s former name.

Trump. The surname of the real-estate magnate-turned-TV-personality-turned-Republican-presidential candidate is a brand – hotels, golf, deodorant, entertainment – as well as a dictionary word with at least two distinct meanings: “to deceive” or “to cheat” (from Old French tromper) and “to surpass” or “to beat” (from an alteration of triumph). In the 1980s, when Trump was a “flashy go-getter from an outer borough,” the journalist Graydon Carter began using an epithet for Trump in the pages of Spy magazine: “short-fingered vulgarian.” “To me,” Carter wrote recently in Vanity Fair, where he’s been the editor since 1992, “his fingers still look abnormally stubby.”

San Bernardino. The Southern California city, population 213,000, where on December 2 a heavily armed married couple opened fire on their co-workers at the Inland Regional Center, a county public-health office, killing 14 and injuring 21. The city is named for St. Bernard, and has two Rs in its name, a fact that proved difficult for many Twitter users – including reporters and news organizations – to grasp.

the killers were wearing GoPro cameras....like the guy in Virginia who murdered the two reporters on air #SanBernadino

*Syria. Since the Arab Spring of 2011, a civil war has caused at least 300,000 deaths and forced nearly half the population out of their homes. This year, the refugee crisis reached epic proportions – World Vision has called it the worst humanitarian crisis in the world today – and became a divisive issue in the U.S. presidential primary campaign. All of the Democratic candidates would allow resettlement of Syrian refugees in the U.S.; 12 Republican contenders would prohibit resettlement. Two Republican candidates, “Jeb” Bush and Ted Cruz, have said they’d accept only Christian refugees from Syria.

*Alphabet. When Google created a new holding company, in August, it looked not to the vocabulary of math or science but to a word that’s familiar to every English-speaking child. The name immediately sparked skepticism and snark as well as enthusiasm (including my own) – a sign that it was an effective choice. Equally novel and interesting is the domain associated with the new company: not a dot-com but abc.xyz.

Daesh. After the November 13 terror attacks in Paris, the French president, François Hollande, and the American secretary of state, John Kerry, began referring to the “jihadist army” behind the massacre as Daesh, an acronym for the Arabic phrase al-Dawla al-Islamiya fi Iraq wa al-Sham (Islamic State in Iraq and the Levant) – also known as ISIS, IS, and ISIL. Daesh is close to Arabic dahes, which means “one who sows hatred” and is intended to delegitimize and mock the organization. For more, see Language Log and Free Word.

Daraprim. An obscure drug used to treat a parasitic infection called toxoplasmosis made news headlines when a 32-year-old former hedge-fund manager, Martin Shkreli, acquired the American marketing rights to it – and, overnight, raised its price from $13.50 to $750 per pill. “The immediate price increase brought the cost of a course of treatment for some patients to hundreds of thousands of dollars,” the New York Times reported.

FIFA. The acronym stands for the Fédération Internationale de Football Association (International Federation of Association Football), which has been tainted by a corruption scandal investigated by the U.S. Department of Justice. In May, 14 high-ranking FIFA officials were arrested; in December, another 16 were indicted for racketeering conspiracy and corruption.

Jade Helm 15. The code name of a U.S. military training exercise conducted in several southern and southwestern states during the summer. The country’s right wing, normally friendly to all things bellicose, responded with a host of conspiracy theories invoking “federal takeover,” “imposition of martial law,” and “World War III.” The Republican governor of Texas, Greg Abbott, ordered the Texas State Guard to oversee the exercises. A Republican presidential candidate and Texas senator, Ted Cruz, asked the Pentagon for “more information.” The exercises ended peacefully on September 15, as planned.

*Hamilton. Alexander Hamilton was, of course, a historical human being. (The first secretary of the U.S. Treasury, he is memorialized on the ten-dollar bill.) But in Hamilton, the new musical (or “hip-hopera,” as GQ called it) by Lin-Manuel Miranda, which opened on Broadway in July, he’s reimagined as a Latino rapper whose songs quote lines from famous hip-hop songs.

Nafea Faa Ipoipo. The title of an 1892 oil painting by the French post-Impressionist Paul Gauguin. A price record was set when the painting sold in February for $300 million in a private sale, reportedly to a buyer in Qatar. Of the ten highest prices ever paid for art, four were posted in 2015. 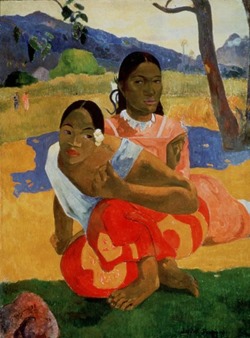 Nafea Faa Ipoipo (When Will You Marry?)

I am glad you included the name I nominated: Cecil