Word of the Week: Cryotherapy

Cryotherapy: The local or general use of extremely cold temperatures in medical treatment – or, as “whole body cryotherapy” (WBC), to alleviate muscle soreness and possibly improve performance among elite athletes. From Greek words meaning “cold” and “therapy.”

Cryotherapy made headlines last week when Chelsea Ake-Salvacion, a 24-year-old employee of the Rejuvenice spa in Henderson, Nevada, was found frozen and dead in one of the facility’s deep-freeze tanks. She had stayed after closing hours “hop into the tanks for a bit,” as she said in a text message to her boyfriend. According to the coroner’s office, she died within minutes of entering the chamber, which had been hypercooled with nitrous oxide to a temperature of -240 degrees Fahrenheit (-151 Celsius).

On October 27, officials from the Nevada Division of Industrial Relations closed the spa, which had been operating without a workers’ compensation insurance policy or a cosmetology license. According to a New York Times report, cryotherapy “is a growing industry, but it is not regulated by any one body, and medical experts dispute its benefits.”

The following day, October 28, the Rejuvenice website gave no indication of the closure. The home page listed a number of cryotherapy benefits, including “instant anti-aging effect” and “detoxification.” 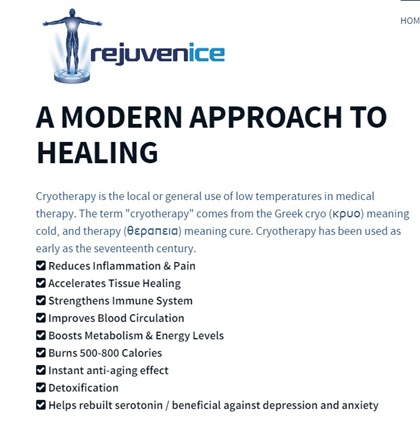 Cryotherapy has been praised by a number of people who command large audiences or speaking fees, including Dr. Oz and reporters for the U.K. Telegraph (“After the three sessions, my skin has a rosy glow and I feel noticeably energised”) and Harper’s Bazaar (“The Frozen Answer to Beauty Perfection?”). However, Stephen Propetier, author of the well-regarded Skeptoid blog, has a more jaundiced view (published November 30, 2014):

The term cryotherapy sounds science-y and futuristic but it is a very featureless description. The combination of science sounding terms plus imprecise meaning makes it a pseudoscience bonanza. Similar to the oft-abused physics term “quantum,” using the word cryotherapy gives the aura of scientific treatment. The sham uses of cryotherapy go far beyond any medical science or any plausible medical benefit. Internet searches for the term produce a multitude of expensive and useless treatments bearing the name cryotherapy. The most egregious one, in my opinion, is “Whole Body Cryotherapy” AKA cryosauna.

As Skeptoid fans well know the term “strengthening the immune system” is almost always a red flag for pseudoscience.

Posted at 06:25 AM in Current Affairs, Science, Word of the Week | Permalink