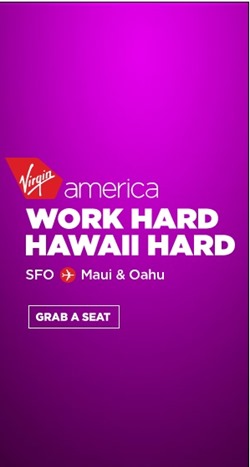 A Virgin America ad – now in heavy rotation all over the Bay Area – for the airline’s new flights from Hawaii to San Francisco.

The first time (and also the second and third times) I saw this ad I didn’t read the headline as an imperative. “Hell, no!” I thought. “Work hard, sure. But Hawaii easy, brah!” Hard just doesn’t jibe with spirit of aloha. 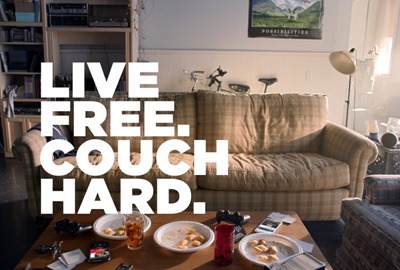 A still from a TV commercial for Totino’s Pizza Rolls. Voiceover, accompanied by “Thus Sprach Zarathustra”: “This is not a couch. This is an act of freedom!”

That is one deeply unappealing photo, but I think you’ll agree with me that couch not look hard. Couch look very, very soft.

But we are so wrong! Because Totino’s – founded in 1951, named for founders Rose and Jim Totino of Minneapolis, and now owned by General Mills – isn’t interested in adjectival hard. This couch – like live, and like work in the Virgin America ad – is a verb, which makes hard an adverb, something made explicit in the Totino’s Tumblr, “the official guide to couching hard.”

These ads may be messing with our (OK, maybe just my) expectations about language, but not in an entirely unprecedented manner. “[Verb] hard” has been around for a long time: Wordnik gives an 1893 citation for “I work hard and play hard.”  One definition of adverbial hard is “with great force, vigor, or energy.” (It can also mean “with great distress, grief, or bitterness” or “in such a way as to cause great damage or hardship,” but those meanings don’t appear to pertain here.) Diehard, the noun, appeared in the 1840s; Die Hard, the movie franchise, originated in 1988.

Then there’s “Party Hard,” a title shared by four songs since 2001, most recently “Party Hard” by Chris Brown (“She’s the life of the party [yeah] / She likes to party hard”). The verb to party has been documented since the 1920s, believe it or not, and I’m fairly certain the phrase “party hard” – like the rhymier variants “party hardy” and “party hearty” – has been around longer than 15 years. Its influence is far-reaching, most recently in the adverbial phrase “so hard,” as in “I am crushing so hard on X.” That sentence simply translates to “I’m having intensely amorous feelings toward X,” but “so hard” can also have milder connotations: “a lot,” “well,” “the best,” or “hella.” Urban Dictionary entries provide a wide range of example sentences: “Dude I nailed that test so hard,” “I just napped so hard,” and even “I like cheese so hard” (which does not necessarily indicate a preference for, say, Parmigiano-Reggiano).

I’m all for wordplay, slang, and clever copywriting. I’ve even been known to favor a certain kind of ambiguity in taglines. But the Virgin America and Totino’s campaigns miss the mark. In appropriating a trope associated with 20-somethings, they end up looking like they’re trying too … well, hard.

Posted at 06:59 AM in Advertising, Airlines, Confusion, Food and Drink, Grammar, Slogans and Taglines | Permalink

>In appropriating a trope associated with 20-somethings [...]

But isn't it arguable that that's the demographic they're aiming at? I shudder to think that pizza rolls are for anyone _other than_ a demographic of younger folk. Haha. I would not at all be surprised to see the Totino's ad playing during a sports event on TV, for example.

Side question: when you say "word hard and play hard" has been around for a while, are you referring only to that combination? If I'm reading the OED right, "hard" has been around as a flat adverb since Anglo-Saxon times, much longer than 1893. (??) Sorry to be thick here.

Mike: >In appropriating a trope associated with 20-somethings [...] < It always strikes me as inauthentic and a little patronizing when advertisers try to sound like the cool kids.

And yes, sorry -- I meant specifically the "work hard and play hard" formulation.

Mike: To clarify a bit further, the use of "hard" to modify [some hedonistic activity] is what's relatively new. The contrast is between play/party/Hawaii/couch (the "newer" activities) and work/fight/push, etc. (the older activities).