When the Saints Go Marching In

Fritinancy Fashion Week wraps up on a reverent note, honoring a quartet of brands with “Saint” in their names.

All Saints’ Day is observed on November 1; All Saints is the name of a David Bowie album; All Saints Records is an independent British record label. The pricey fashion brand AllSaints was founded as a menswear wholesaler in London in 1994 by Stuart Trevor; according to one account, related in a Wikipedia entry, the company was named for Trevor’s pseudonym, “The Saint,” which in turn was based on his initials (ST). Another version of the name story, told in a 2011 Seattle Times article, gives All Saints Road, in London’s Notting Hill, as the source. The company began selling women’s fashions in 1998; in 2010, when the company opened its first U.S. store, in New York City, the New York Times’s Critical Shopper observed that the brand “thrives on paradox, having entered fashion’s mainstream by placing its stamp on a trend-averse marginal culture, one built on the fusion of modern technology and the crudely mechanized cosmos of the late Victorian age” – steampunk, in other words. The current aesthetic is sleeker and more contemporary to judge from the product shots on the U.S. website, but you can still buy an “iconic leather jacket.” 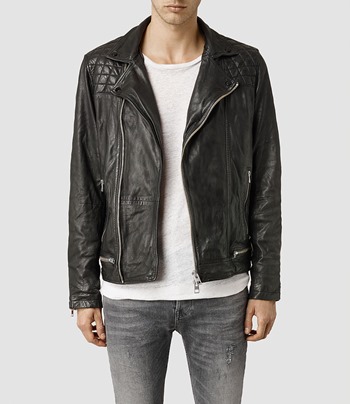 This New York “travel and fashion lifestyle brand” makes handcrafted duffel bags that can be customized with your choice of leather, lining, and hardware. The founder is Sam Payrovi; I couldn’t find an explanation of the Saintly name, but the logo depicts a fleur-de-lis, the symbol of St. Louis (Missouri) and the New Orleans Saints.

Yes, it’s another brand name that ends in -ly. 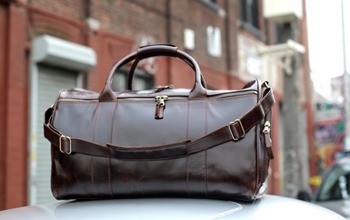 Weekender bag from Saintly’s Indiegogo campaign, which fell short of its goal.

Saint Harridan, which opened in downtown Oakland, California, on September 12, sells masculine clothing for women and transgender men – “a big market opportunity,” according to a TechCrunch profile of the company. Founder and CEO Mary Going told TechCrunch that Saint Harridan is more than a clothing company: “We’re a company whose mission is about validation and inspiration, and for people who have traditionally been marginalized and sort of felt the opposite of those things.” Harridan is not a neutral word: it entered English around 1700 as a cant word meaning “one who is half whore, half bawd”; its probable origin is French haridelle (“a poore tit, or lean ill-favored jade”). The meaning evolved into its current one: “a woman who is critical or scolding.” All of which makes the Saint Harridan name seem puzzling at first, but it was chosen intentionally, the company says on its website:

If we were to use words like stud or butch, we would inevitably represent some people, but leave others out. We looked for a word that could expand our options. A Saint, among its many other definitions, is “a founder, sponsor or patron of a movement.” We think that's fitting. If you, by your very existence -  including the pronouns you choose, the clothes you wear and the gender you perform - are undermining the gender binary, then that makes you a leader in this movement. And, in our book, that makes you a Saint.

Using the word Saint is also a nod to the notion that there is no one religion and no one doctrine that can dictate one’s relationship to “God.” If you believe in a entity bigger than the self, then you have a relationship that no one can take away from you.

As for harridan, the company calls it

a reclaimed word. It means “mannish woman” and has been used as a slur - to keep women from venturing too far from societal expectations.  Venture, my friend. Venture. Claim your power. Claim your dignity. 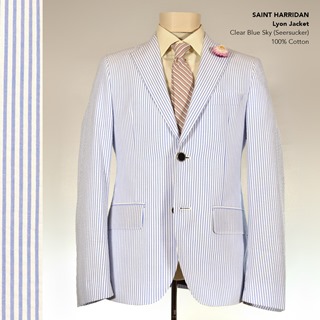 This UK company (which delivers internationally) doesn’t actually sell bustiers – you know, the corset-like garments that, as Sandra Bernhard famously said, boost your yays. No, this “bustier” is a comparative adjective: the company “is a unique online fashion boutique that allows women with big busts to shop for clothes in exactly the same way as their less busty friends.” But if you want to pronounce it à la française, go right ahead. 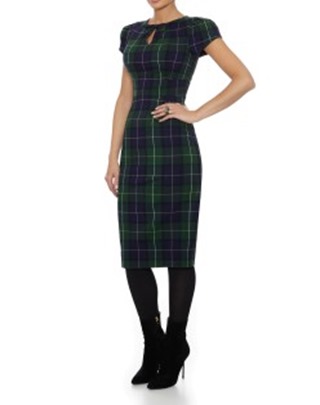 The web copy doesn’t mince words – its customers are “busty women” with “fabulous, full busts” – D to H bra-cup sizes. (The corporate tagline is “A Cup Above the Rest.”)

If all that talk about busts has you wondering how this word came to refer to breasts … well, it’s a strange story. In the late 17th century, bust meant “a sculpture of the upper torso and head,” a meaning it retains in discussions of art. The word came into English from French buste and Italian busto (“upper body”), but its real origin is Latin bustum, which I’m sorry to say means “funeral monument” or “tomb.” According to the Online Etymology Dictionary, the “sense development in Italian is probably from Etruscan custom of keeping dead person’s ashes in an urn shaped like the person when alive.” The entry adds, tersely: “Meaning ‘bosom’ is by 1884.”