« On the Visual Thesaurus: Fall-ify Your Vocabtoberfest! | Main | Word of the Week: Trick or Treat » 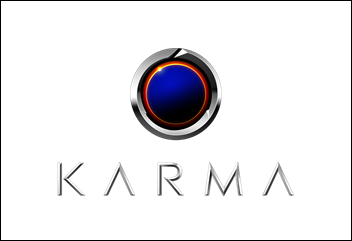 “Renaming a failed company after its one car − which itself had a dubious record − is a strange move,” observed Alastair Charlton, a reporter for the International Business Times. “Either you can’t keep a good car down, or some people just don’t know when to quit,” marveled Jim Gorzelany in Forbes.

“Karma is based on the principle of cause and effect, where your actions create your future,” Taylor explains. “This awareness of what we are doing and why we are doing it – which we characterize as acting with intention – is what we stand for, it’s authentic.”

“My karma ran over your dogma” bumper sticker. Via Zazzle.

Karma is a Sanskrit word that translates literally to “action” or “fate”; in Hinduism and Buddhism it signifies (per Collins English Dictionary) “the principle of retributive justice” or (per American Heritage Dictionary) “the totality of a person’s actions and conduct during successive incarnations.” Bad actions lead to reincarnation in a lower order of being; good actions lead to rebirth in the higher orders.

Informally, here in the capitalist West, karma has a looser meaning: “aura” or “vibe.” But strictly speaking, lower-case karma is about cosmic justice, not happy endings.

Nevertheless, that grim reality hasn’t stopped some 460 companies from pursuing trademark protection for KARMA names.* Here’s a sampling of the filings in 2014 and 2015 alone:

CAMPAIGN KARMA (unrelated to the above; online community for political-campaign volunteers)

GREEPS THE GOOD KARMA (invitations in the form of fabric dolls)

DAILYKARMA (an app for charitable donations) 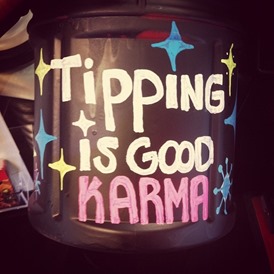 * I get the same mixed signal from the several companies named Pandora, including the music-streaming service. They all ignore the meat of the myth, in which Pandora released evil and suffering into the world. Sure, she kept Hope in that jar of hers, but that’s not enough to build a brand on.

Posted at 06:51 AM in Cars and Motorcycles, Names in the News, Naming, Religion, Renaming | Permalink

I don't know - yes, it's elegant, but also it seems like "karma" is too personal a message in terms of the corporate history to be conveying via the brand name. Alternatively, as you noted, it's got "car" in it, so it's funny, no? No. But ultimately, as you point out, "karma" is so widely used that it's no longer distinctive. I assume when I see it that the user lacks originality. (Yeah, I'm critical this morning ...)