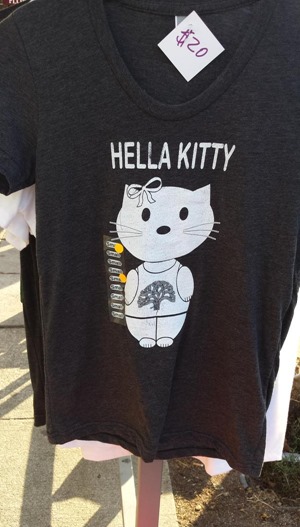 “Hella Kitty” T-shirt, Grand Avenue (Oakland) sidewalk sale. A parody (and probably an infringement) of Sanrio’s famous Hello Kitty mascot; also a crude infringement of the Oaklandish oak logo. (Via Twitter, Oaklandish assured me that this is not one of their products.)

“Hella”—a compression of “hell of a”—began appearing in the San Francisco Bay Area in the 1970s; language maven Allan Metcalf* has called it a marker of California dialect. It’s commonly used as a modifier, but this T-shirt misses the mark lexicographically. And she followed up with this:

Seriously: you can't say "hella" is an adverb and define it as a noun (1 & 2, wrong) and an adjective (3, wrong). MY TENDER SENSIBILITIES!

Here’s another faux-definition “hella” shirt that gets it wrong in a different way, classifying the word as an adjective but giving example sentences in which it functions as an adverb.

Faux definitions are a marketing scourge.

This bilingual “hella” made me smile. 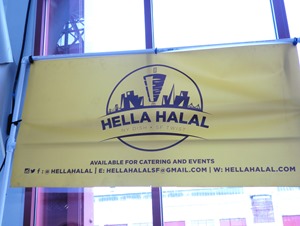 Halal is an Arabic word that translates to “permissible”; halal food is prepared according to Muslim law and excludes pork, blood, intoxicants, and animals killed incorrectly.

In 2010, UC Davis student Austin Sendek started a petition to designate “hella” as the SI (International System of Units) prefix for one octillion (1027). He gathered more than 60,000 signatures and a fair amount of press coverage, but the proposal was officially rejected. However, the prefix has been adopted by Google Calculator and WolframAlpha, where you’ll find units like hellavolt and hellasecond.

But I haven’t yet seen any hella-units swag. Let me know if – and where – you have.

* Yes, this is the second time this week I’ve cited Allan Metcalf.

Posted at 06:30 AM in In the Wild, Naming, Oakland, Restaurants, Retail, Slang | Permalink

When I was young, 'heck' was an acceptable substitute for 'hell', when there were still such things as bad words. As in, "Where in the heck are we?" which would only raise Mom's eyebrows moderately.

Amusingly, when my sons were young -- say, twenty years ago -- they substituted 'hecka' for 'hella'. "Dad, that movie was hecka scary."

Hello Kitty always drags me into the Wikipedia wormhole which links from Maneki-neko: beckoning white cats are an ancient Japanese thing that makes strange incursions into our lives here on the Left Coast. And so, I'm mildly disappointed that Hella Kitty has a bow and is not waving.

I laughed out loud when I encountered a woman wearing a shirt with a picture of a dead cat, labeled, in cutesy lettering, "goodbye kitty."