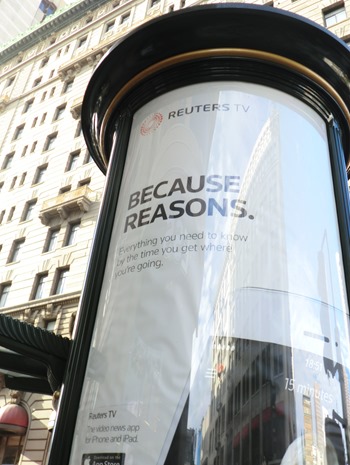 Geary and Powell streets (Union Square). On the other side of the kiosk is a charming Kiosk Museum.

This ad is for the Reuters TV mobile app, which delivers “everything you need to know by the time you get where you’re going” – an unnecessarily convoluted subhed that’s further confused by the awkward division of the second line. But I’m primarily interested in the headline, “BECAUSE REASONS,” which borrows a trope popularized online a couple of years ago. A Wiktionary entry categorizes the phrase as “Internet slang,” and gives this definition: “Used to avoid specifying the reasons for something, perhaps because specifying them would be tangential to the point at hand, or perhaps because they are not sound or are not known to the speaker.”

“Because” used in this way was the American Dialect Society’s word of the year for 2013. Ben Zimmer, chair of the society’s New Words Committee, explained the choice in a press release:

“This past year, the very old word because exploded with new grammatical possibilities in informal online use. … “No longer does because have to be followed by of or a full clause. Now one often sees tersely worded rationales like ‘because science’ or ‘because reasons’.”

Reuters, which was founded in 1851 and is based in London, may have chosen “Because Reasons” to prove that it’s one of the cool kids and not a Victorian-era fossil. But coming from an international news agency, the headline strikes me as lazy and unconvincing. 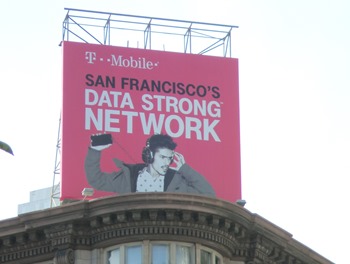 T-Mobile, which bills itself “the un-carrier,” launched its “Data Strong” campaign last year, but this particular ad was new to me. A June 2014 announcement from T-Mobile’s chief technology officer hyphenates “data strong”: “It’s not in our DNA to act like those old phone utilities. Their networks are based on a dial-tone paradigm. Ours was designed differently. We call this being designed data-strong.” (DNA! Gee, that brings back memories.) He also hyphenates “data-friendly” and “data-driven,” all of which make more sense to me than the unhyphenated style.

Hyphens aside, what caught my attention was the “X strong” construction. Noun-preceding-adjective is unusual in English, but “X strong” has been, well, going strong for a number of years. Its antecedent, according to Ben Zimmer – yes, the selfsame Ben Zimmer, writing for Vocabulary.com and the Boston Globe – is “Army Strong,” the recruiting slogan introduced in 2006; subsequent variations have included Country Strong, Boston Strong, and Jersey Strong. (And all of those “X Strongs” probably owe a lot to “Ford Tough,” a formula the carmaker introduced in the 1970s.)

T-Mobile is a sponsor of Major League Baseball, and Ben Zimmer told me in a tweet that the un-carrier sponsors Data Strong Fan of the Game photo contests “involving tweets with unwieldy hashtags.” 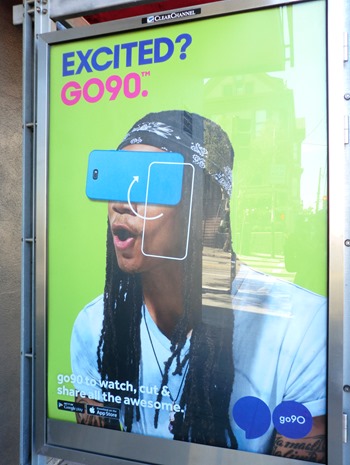 Verizon launched its new mobile video service, Go90, this week. The aggressively casual lower-case tagline – “go90 to watch, cut & share all the awesome” – turns awesome into a noun. Remember when Xfinity did that? The line break makes me grit my teeth – it should logically follow share – and the ampersand is another “look at how cool and Millennial we are” annoyance. There’s plenty of room to spell out and.

But my point here is the “Excited?” headline. It would be unexceptional if excite, exciting, and excited were not so prevalent in the contemporary language of commerce. An online survey opens with “We’re excited to hear from you.” An email from Nordstrom Rack bears the subject line “Get excited!” Vogue’s spring movie guide is headlined “15 Films We’re Excited to Watch.” A travel company lists “5 Reasons We’re Excited to Go to South Africa.” ETOnline lists “19 Reasons We’re Excited” that the actress Anna Kendrick is publishing a book. Excited appears five times, and exciting once, in Google’s announcement of its new parent company, Alphabet. It’s a level of emotional fervor matched only by its punctuation equivalent: the “exclamation epidemic” noted by the Boston Globe in 2012 (and, not long after, by Steve Macone in Salon and Ben Yagoda in the New York Times). As “Timorr” put it in a comment on another post by Ben Yagoda – this one about excited, for the Lingua Franca blog – “One suspects corporate America is barely able to remain seated.” (Compare passion.)

Then there’s the newish construction (not used in the Go90 ad) “excited for [noun]”: excited for autumn, excited for the weekend, excited for Disneyland, excited for Halloween, excited for Taco Tuesday. I touched on this subject last year in a post about Dove Deep Moisture Nourishing Body Wash – a product whose package insert includes the line “We’re excited for you to take the One Shower Challenge!” – and I’ll be revisiting it soon. Meanwhile, I’d be interested in – nay, excited for – your comments and contributions.

By the way, when Go90 was announced earlier this year, at least one observer called it “a truly terrible name.” That’s because Verizon was lazy, or cagey, about the reasoning behind the name. Now they’re using that superimposed white outline as a clue. Get it? OK, I’ll help you out: “The name reflects the way users would normally flip their phones from vertical to horizontal in a 90 degree movement,” according to TechTimes.

Posted at 06:58 AM in Advertising, In the Wild, San Francisco, Sloganclones, Slogans and Taglines, Trends | Permalink

I didn't get "Go90," even with the white outline phone, until you explained it. Further, "GO90" in all caps starts to look like "GOO" to me.
It must be "creative" because I don't get any of it. Or I'm not in their desired demographic.