Word of the Week: Skulduggery

Skulduggery: Underhanded or unscrupulous behavior; a devious device or trick.

This relative rare and interesting word has been in the news last week in connection with a football furor: after the opening game between the Pittsburgh Steelers and the New England Patriots, Pittsburgh Steelers’ coaches “said their headsets were filled with the sounds of the Patriots’ radio broadcast of the game, making it hard to communicate with one another,” according to a New York Times story published September 12. An earlier version of the story – no longer visible on the Times site – contained the mention of skulduggery, as a Google search shows:

Earlier this year the Patriots, who are the defending Super Bowl champions, were the target of accusations about a supposed scheme to deflate footballs in a championship game. That brouhaha has become known as Deflategate (which uses the ubiquitous -gate suffix appended to virtually every scandal since Watergate) or, occasionally, Ballghazi (a reference to the 2012 assault on a U.S. embassy in Libya, and the subsequent investigation).

Because of that skul- syllable, skulduggery seems like an apt word to connect with a dispute over headsets. After all, a popular headset brand – used for music, not football plays – is called Skullcandy. But skulduggery has nothing to do with skulls; nor is it related to sculling, a type of rowing, or to scullery, the part of a household concerned with kitchen utensils, or to skulk, to move stealthily or to avoid responsibility. (The origin of the word scull is unknown. Scullery comes from French escuelerie, “the office of the servant in charge of plates.” Skulk came into English in the 12th century from a Scandinavian word meaning to shirk or malinger.)

Nor does the -duggery part of skulduggery have anything to do with digging.

Skulduggery entered English in the mid-19th century as an alteration of a Scottish word, skuldudrie, which means “adultery,” “fornication,” or “obscenity.” (It was “a euphemism of unknown origin,” says the Online Etymology Dictionary.) The Oxford English Dictionary gives skulduggery’s origins as American, and credits William Faulkner with a back-formed verb, “to skuldug.” The dictionary’s first citation, dated 1867, shows how the term’s meaning had migrated: “From Minnesota had been imported the mysterious term ‘scull-duggery’, used to signify political or other trickery.” Synonyms for skulduggery offered by Vocabulary.com include hocus-pocus, hanky-panky, and jiggery-pokery.

This isn’t the first time the Times used “skulduggery” in connection with the New England Patriots. In May, recapping a 2007 “espionage incident” that resulted in a $250,000 fine against the team, the paper said the team’s “rascally leader,” Bill Belichick, had in January of this year “made perhaps his most extended comments on the spying case and gave a window into his thinking on certain kinds of skulduggery.” The Wall Street Journal used the word, too, in a pre-headset-skulduggery column written by Jason Gay and published September 3:

It’s obvious that a substantial portion of the football universe believes the Patriots are capable of skulduggery, having been punished for it before, in Spygate (argh with the -gates; let’s give a Pulitzer to anyone who comes up with a new scandal suffix). … If the Patriots were indeed guilty of what the league has suggested, it appears to be, at best, low-level skulduggery…

Skulduggery is no longer an exclusively American English word, as these UK citations from stories about rugby and soccer/football indicate: 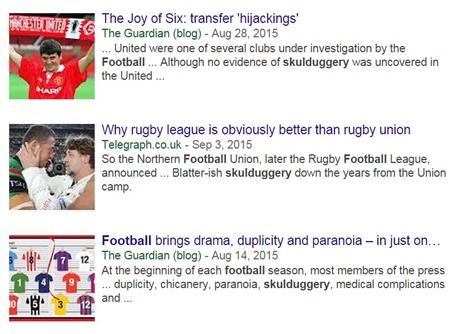 Posted at 06:30 AM in Current Affairs, Sports, Word of the Week | Permalink