« Word of the Week: Waist Trainer | Main | Fashion Name in the News: Bombfell »

On September 14, Lane Bryant – founded in New York in 1904 as a maternity-clothing boutique – revealed itself as the advertiser, and brought the six models out from the shadows. 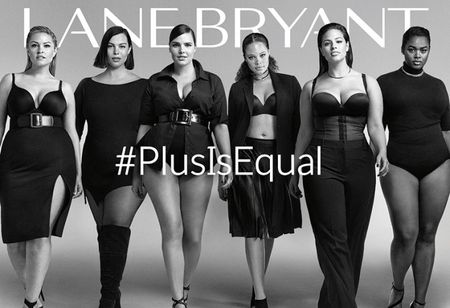 The company launched the campaign that day with a noon rally in Times Square. Mic.com called it a “historic event.”

#PlusIsEqual isn’t just a hashtag, Lane Bryant wants us to know: It’s a movement. Here’s the introductory copy on the Plus Is Equal website.

67% of US women are size 14 to 34. But they’re underrepresented on billboards, magazines, TV … everywhere. We believe all women should be seen and celebrated equally.

The tagline is simultaneously geeky (math symbols!) and sentimental (we’re all alike!) – and it boldly reclaims the sometimes-controversial plus, a retail category pioneered by Lane Bryant itself back in the early 1920s.

The OED’s earliest for citation for plus size is a 1922 ad in the New York Times in which Lane Bryant boasts that it “has originated fashionable apparel in ‘Misses-Plus’ Sizes, solving the heretofore unattempted problem of creating fashions, ready to put on, for the woman of smaller stature and fuller figure.” (The OED’s definition of plus-size is “a large size.”) Five years later, writes Ben Zimmer in the Wall Street Journal, the chain began using plus without the misses. “Plus-size” (and eventually “plus-sized”) originally referred only to clothes “rather than to the person wearing them,” Ben writes, adding: “A subtle shift in usage is evident in a 1953 ad for the Korell brand, from the Daily Record of Statesville, N.C., featuring a ‘wonderful action-plus dress for the plus-sized woman’.” Plus-size started being shortened to plus in the late 1970s, popularized by Plus Models Management Ltd., founded in 1978.

Nevertheless, for decades after appropriating plus Lane Bryant continued to use an older term, “stout,” to describe its customer.

In the 1920s about 12.7 percent of Americans fit the criteria for “stout,” write Carmen N. Keist and Sarah B. Marcketti in a 2013 article for Clothing & Textiles Research Journal. (That’s just over one-eighth of the population then, just over two-thirds now.) The term “indicated an (often matronly appearance) with generous bust, back and hip curves that did not fit with fashion’s demands of the ideal stylish figure.”

Plus may have originated as a gentle euphemism (no more “Calling All Chubbies” ads!), but lately it’s been met with ambivalence. On the one hand, there are self-identified members of “the plus community” (and consultants targeting “the plus community”). On the other hand there’s the #droptheplus campaign, launched earlier this year, which rejects all “wrong labels” and chides:

“Plus” implies bigger than “normal”. Any model above US size 4 is considered a “plus sized” model. The average American woman is US size 14. Mixed with all the other body image pressures facing women, the implication that most women are “plus sized”, not “normal” is very dangerous to women and society.

(Emphasis in the original.)

I feel obliged to note here that a U.S. size 4 is not regarded as small in a world where retailer J. Crew, for example, sells women’s clothing in sizes XXXS and 000. And see this chart – one of three depicting “crazy American obesity” – for a comparison of dress sizes over the last half-century-plus. Size 4 shows up on the graph only in 2001, and it’s bigger than an 8 was in 1958. 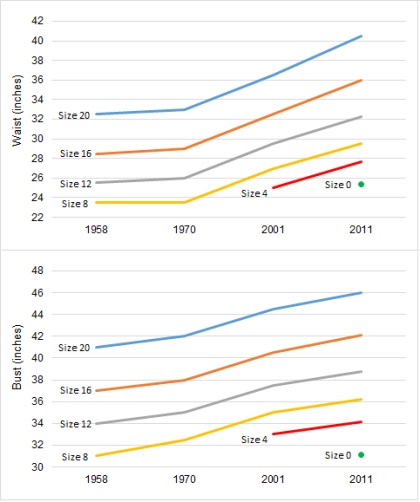 The future of extended sizing may be manifested in a new label, Universal Standard, which sells women’s clothing in sizes 10 to 28. (A Universal Standard “extra-small” will fit a woman with a 40-inch bust and a 35-inch waist – roughly the fit of a size 20 in 1958.) In interviews, co-founder Alexandra Waldman, a self-described plus, drops the P-word. But on the website, the word doesn’t appear, although the symbol does (“women size 10+”). The brand’s tagline is the don’t-fence-me-in “I know what’s beautiful.” And the label’s monogram is the inclusive “US.”

For more on the multiple meanings of plus, see my 2013 column for the Visual Thesaurus, “Shall We Plus?” and my post about Sutter Health’s “We Plus You” campaign.

Posted at 07:28 AM in Advertising, Fashion, Fashion Week, Plus, Retail, Slogans and Taglines, Women | Permalink