Name in the News: Lava Mae

It’s hard to stay clean when you’re sleeping on the streets. A new San Francisco nonprofit, Lava Mae, has an ingenious remedy: transforming old Muni buses into mobile bathrooms, complete with stall showers and toilets, that travel to neighborhoods with the greatest need.

Lave Mae and its founder, former public-relations executive Doniece Sandoval, were featured in the San Francisco Chronicle earlier this week on the occasion of the unveiling of Bus No. 2. Sandoval’s plans include expansion throughout California. 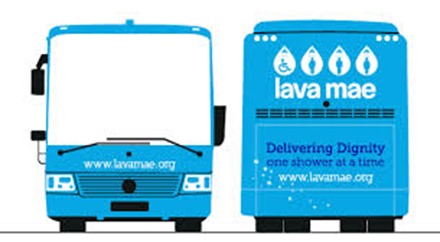 “Delivering dignity, one shower at a time.” For more on the “One X at a Time” sloganclone, see this 2012 post (and follow the links for more).

According to the Chronicle story:

Lava Mae’s simple solution of providing homeless people with showers and toilets has captured the attention of people around the world, many of whom have asked Sandoval to help them create a similar program.

To deal with the huge interest, Sandoval is working with the International Centre for Social Franchising, which is based in London but also has an office in San Francisco. It seeks to help organizations with a social benefit replicate their work in other places around the world.

Sandoval has decided to focus on serving 30,000 homeless people around California by 2020 — and recently met with state Sen. Holly Mitchell of Los Angeles to discuss a Lava Mae-type program there.

There’s a feel-good story behind the Lava Mae name, too. Here’s how the organization’s website tells it (verbatim):

In Spanish, “lavame” means “wash me”

In our culture, we refer to vehicles in the feminine as in, “She’s a beauty, isn’t she?”

In the South, (where our founder grew up), it’s not uncommon for people to have two first names e.g Billy Bob, Peggy Sue. Putting it all together gave birth to the name Lava Mae 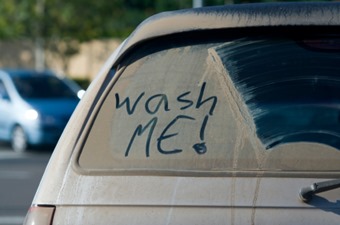 OK, the copy needs some, um, cleaning up. If you want to be picky about it – hey, it’s in my job description! – it’s “lávame,” with an acute accent to mark the stress on the first syllable. And I cringed a little at the bio that reads “Brett is the principle and founder of StudioTerpeluk.”

I’ll stop quibbling now and instead reaffirm that I like the Lava Mae name: it’s friendly, personal, down-home, clever, and bilingual. (The echoes of Fannie Mae and Sallie Mae, which also aim to help people in need, may be intentional.) And I applaud the work Lava Mae is doing. In a region dominated by whiz-kid techpreneurs whose idea of “making the world a better place” is selling an app that does stuff your mom used to do for you, this is a truly creative and, yes, disruptive initiative.

Posted at 10:08 AM in How They Got That Name, Names in the News, Naming, Nicely Named, Nonprofit, One X at a Time, San Francisco, Sloganclones, Slogans and Taglines | Permalink

My own native dialect goes for the latter, but voseo is rare in the geographical areas from which most of the Californian Spanish-speaking population hails, so probably ’lávame’ would go better with them.