Name in the News: Bentayga

At the Frankfurt Motor Show this week, Bentley Motors, a wholly owned subsidiary of Volkswagen since 1998, unveiled its first SUV, the Bentayga. Bentley has already sold out the full first-year production – 3,500 vehicles – of the $229,100 (base price), 600-horsepower behemoth. Buyer #1 was Queen Elizabeth II, who reportedly will use the vehicle for her hunting expeditions in Scotland. Tally ho! 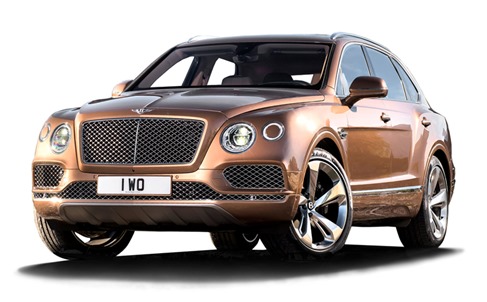 Bentley CEO Wolfgang Dürheimer called the Bentayga “the Bentley of SUVs.” Duh! What else would it be – the Cadillac of Bentleys?

As for the model name, good on Bentley for finding an obscure geographical reference that just happens to share four letters with Bentley. Back in January, when the Bentayga name was originally announced, Digital Trends reported that:

This name is said by Bentley to be inspired by the Taiga snowforest that crowns the northern hemisphere, as well as the Roque Bentayga, a rock formation on the Spanish island of Gran Canaria. The exotic title is meant to evoke the dramatic beauty and spectacular views both areas offer as a reward for enduring a rugged excursion.

All very inspirational. There’s just one tiny problem: the official pronunciation of Bentayga doesn’t reflect either of these provenances.

Here: Watch a video in which Michael Winkler, the president and CEO of Bentley Motors in the Americas, repeats the “Bentley of SUVs” line and clearly renders the name as ben-'tā-gə, with a long A. (An almost-rhyme with “Talladega,” as Dustbury put it.)

But taiga and Roque Bentayga are both pronounced with a long I, like tiger without the R.

I admit I’m picky when it comes to quarter-million-dollar cars, but I find this perplexing and annoying. It’s one thing when a brand simplifies a pronunciation to make a name more accessible. It’s another thing entirely to provide a strong naming story and then jettison it with a pronunciation that obscures that relationship.

Bradford Wernie of Automotive News Europe had more to say about the Bentayga name in a January column:

When it comes to quirky names for SUVs, Volkswagen Group has the market pretty well cornered.

This is the German company that dreamed up the Touareg, named for the nomadic Tuareg people of North Africa, and Tiguan, a combination of the words tiger and iguana. Both wear the Volkswagen brand.

They’re the sort of names that send journalists scrambling to Google for a quick spell check.

Now we can add a new head-scratcher to the list: the Bentley Bentayga. That’s what Bentley is christening its first-ever SUV, which will be introduced later this year and will go on sale in 2016. …

At first blush, Bentayga seemed like a good name for a new pain reliever. Bengay, anyone?

At least, wrote Wernie, we can be grateful “that Bentley didn’t saddle us with another alphanumeric/alphabet soup name to remember.”

In related good news for the 1 percent of the 1 percent, AutoWeek reports that Rolls-Royce will introduce its own luxury SUV in 2018:

Rolls-Royce CEO Torsten Muller-Otvos indicated that the SUV is likely to carry the Cullinan name into production, sourced from the world’s largest rough diamond, which itself was named after the owner of the Premiere Mine in South Africa, Sir Thomas Cullinan.

I did a little research into the Cullinan diamond, which in its original state weighed 3106.75 carats. It was presented to Britain’s King Edward VII in 1908 and then cut into nine large gem-quality stones and a number of smaller fragments. “The story goes,” says the Wikipedia entry, “that when the diamond was split, the knife broke on the first attempt.”

As you know, I have a bit of an attitude about diamonds.

Posted at 06:45 AM in Cars and Motorcycles, How They Got That Name, Naming, Pronunciation | Permalink

Have you written about Cadillac's upcoming alphanumeric soup names? Apparently all their new cars will be CT-number and all their new SUVs will be XT-number, except for the Escalade, of course, whose name has far too much cachet to abandon.

I'm not a fan of alphabet soup names to begin with, but I'm having a hard time seeing the rationale behind the change. It seems like it'll only confuse consumers.

Jonathon: I haven't written about that particular naming convention, although I've written about the general use of "X" in model names: http://www.visualthesaurus.com/cm/candlepwr/the-x-factor/

I'll leave the Cadillac CT/XT story to someone else: I prefer to write about names with a little more story!

The mine's name should be 'Premier', according to most internet sources. I haven't been able to track down which reporter introduced the error.