Word of the Week: Yuccie

Yuccie: A Young Urban Creative, as defined and described by David Infante, “a 26-year-old writer who lives in a gentrifying neighborhood in Brooklyn,” in an article for Mashable published on June 10. Infante calls yuccies “a slice of Generation Y, borne [sic] of suburban comfort, indoctrinated with the transcendent power of education, and infected by the conviction that not only do we deserve to pursue our dreams; we should profit from them.”

“I am the yuccie,” Infante writes. “And it sounds sort of, well, yucky.”

Yuccie follows the word-coinage pattern established by yuppie, an acronym-with-diminutive-suffix for Young Urban Professional that emerged from various sources in the early 1980s. Yuppie echoed both hippie, originally a non-acronym diminutive of hipster that first appeared in 1953 and reappeared in 1965; and Yippie, an acronym-with-diminutive-suffix for the parodic Youth International Party founded on December 31, 1967, by Abbie Hoffman, Jerry Rubin, and other activists.

Other catchy coinages that employ the -ie suffix include foodie (a gourmet or gourmand), techie (a technology worker or enthusiast), selfie (a self-portrait taken with a mobile phone), lippie (lipstick), and sunnies (sunglasses). Ben Yagoda, who tracks the Britishism invasion in American English, has documented an American usage of nappies (diapers); it may be a sign of more to come.

Yuck—an interjection used to express contempt or disgust—has been documented in print since the mid-1960s, and probably uttered unrecorded for centuries before that.

So far, Infante’s article has been shared online more than 178,000 times and picked up by publications in the Czech Republic, France, Italy, Portugal, Poland, and elsewhere.

Caille Millner, a columnist for the San Francisco Chronicle, is skeptical:

“Yuccie” has something powerful going for it — by force of acronym, it’s perfectly designed to become the lazy insult for which it will be used. “Yuccies,” after all, are yucky, and the pun is already present. …

On the flip side, there’s some falseness in the words that make up the acronym.

“Creatives” is neither a real word nor a real lifestyle. And if these kids keep it up, infecting every city in the world with their craft beers, their midcentury modernism fetishes and their visceral disgust with poverty, the “urban” part of their aspiration is set to become just like the rinky-dink suburbs in which they grew up.

Young Anxious Self-Referents is more accurate, but “yasers” doesn’t have quite the same ring.

For better or worse, “creatives” is very much a “real word”; it’s included without judgmental qualifiers in the American Heritage Dictionary and the Collins English Dictionary (“a creative person, esp. one who devises advertising campaigns”).

And this is what I grew up calling a yucca: 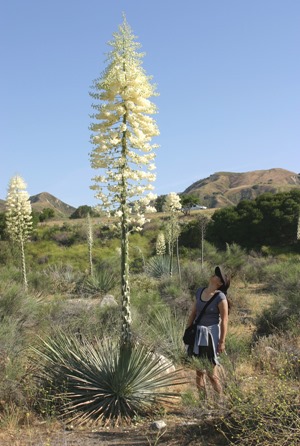 The plant formerly known as Yucca whipplei recently was determined not to be a true yucca after all, which is sad for the town in San Bernardino County, California, named Yucca Valley. Yucca in all cases is technically a misnomer; it was derived by Linnaeus from yuca, the Taino name for the edible cassava plant, which is a different plant from the double-C yucca.

Posted at 06:20 AM in Acronyms, Culture, Neologisms, Word of the Week | Permalink

I would pronounce "Yuccie" with an Italian twist - "you-chee-eh." Because that's how I roll.