Tendr #1, founded in February 2013 and based in Brooklyn, got first dibs on tendr.com.

“Elegant” aside, this is a virtual begging bowl whose intended audience is engaged couples and their wedding sponsors guests. According to the company’s Crunchbase profile, each year a total of $34 billion is given as cash gifts in the U.S.; Tendr helps you snag some of that loot. “Our nominal service fee kicks in only once the gifts are rolling in,” Tendr #1 assures us. I assume that Tendr also absolves you of nominal shame.

Tendr #2,which launched in London earlier this year, can be found at tendrdeals.com. 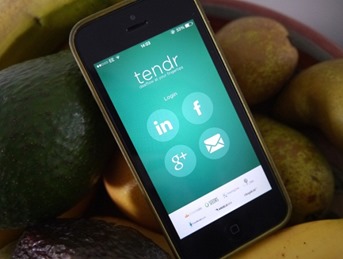 This Tendr—which prefers lower-case styling—is “a mobile aggregator of all leading equity crowdfunding platforms in the UK.” There’s a disclaimer in the Crunchbase profile:

tendr is not a crowdfunding originator. tendr is an aggregator of publicly available information, you will need to register on each platform and agree to specific terms to access additional investment information. tendr is targeted towards investors who are sufficiently sophisticated to understand these risks and make their own investment decisions. Investing in early stage businesses involves risks, including illiquidity, lack of dividends, loss of investment and dilution, and it should be done only as part of a diversified portfolio.

It’s easy to deduce why tender in its original spelling appealed to both sets of company founders: it’s a word with multiple relevant meanings. The adjective tender—which in the early 13th century meant “soft, delicate, young” and a century later took on the additional meaning of “kind, affectionate, loving”—comes from Latin tenerem (“soft, delicate; of tender age, youthful”). The verb tender—“to offer formally”—comes from Latin tendere (“to stretch, extend”) by way of Middle French tendre, and entered English in the 1540s. (According to the Online Etymology Dictionary entry, “the retention of the ending of the French infinitive is unusual.”) The noun sense—“an offer of money, or the like, in discharge of a debt or liability”—also first appeared in the 1540s. We still see it in expressions like “legal tender.”

A third meaning of tender is “one who tends (to something).” This noun form also comes, indirectly, from Latin tendere, and more directly from attendere (“to give heed to”). Thus furnace-tender, bartender, and, more recently, budtender. (There’s also the nautical tender, a support boat, which comes from the same etymological source.)

Tendr #1 is an appalling concept, etiquette-wise, but etymologically it’s a dandy name: a smooth merger of the adjective, verb, and noun senses of tender. The service is suitable for occasions like marriage that celebrate tender feeling; it involves the exchange of legal tender; and the app takes care of (tends to) the crass details.

Tendr #2 draws only on the financial meanings of the word; tender hearts and tenderfeet (inexperienced people; first attested in the U.S. in the 1880s) probably need not apply.

And what of the dropped E in both Tendrs? Well, someone is squatting on the tender.com domain, and probably wants a boatload of legal tender in exchange for it. All the other popular top-level Tender domains are likewise taken. So I’m speculating that both sets of founders took the lazy way out and sacrificed an E to get cheap dot-com domains. There is, of course, plenty of precedent in startup circles for -r as a substitute for -er. Flickr, founded in 2004, is probably the ur -r; when Twitter launched in 2006 it was called Twittr.com. (Twitter later bought the vowel-enhanced domain for $7,500.) Tumblr, Grindr, Mixr, Namecheckr, and others followed; see my Pinterest board for 49 missing-E copycats.