Did you know that there are—at last count—302 English-language generic top-level domains (gTLDs), from .academy to .zone? At least 20 of them were released in 2015 alone. Many are administered by Donuts, a registry founded in 2010 specifically to offer “the newest and most creative online naming options.” Donuts practices what it preaches: its own domain is Donuts.domains. 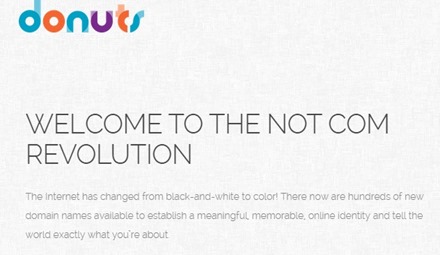 Note: I have no connection whatsoever to Donuts and do not own any of their domains. Nor am I affiliated with Donuts’ naming subsidiary, Name.kitchen. I do, however, applaud their marketing moxie.

Combine these options with the dozens of top-level country-code domains—from .ac (Ascension Islands) to .zw (Zimbabwe), and you have a lot more latitude with your online brand than you may have thought.

This can be a huge advantage when you hit the wall of the Parked Domain With No Site and an Evasive Owner, an all-too-frequent occurrence in my line of work.

Suppose, for example, that I wanted to start a new name-development business called Yclept. (It’s a Middle English word meaning “named” or “called.” Long ago I briefly considered using this pleasantly geeky word as my business name.) Yclept.com is registered through 2019, but I have no idea what’s going on with the website. A logical alternative, Yclept.co, is likewise parked and undeveloped. Sure, I could get the .biz domain for $7.99. But if I spent just a little more ($24.99) I could own Yclept.city (“Where name development never sleeps!”). And for just $4.99 I could buy Yclept.xyz (“The last word in professional name development”).

Stafford.re is a real-estate agency in Oakland, California. The .re domain belongs to Réunion, a French territory in the Indian Ocean, but its initials suggest “real estate.”

StirCreative.agency calls itself “a creative agency for arts and cultural organizations.” (Disclosure: I am personally acquainted with one of Stir Creative’s owners, but I was not involved with the naming.)

MrSunshine.solar sells and installs solar panels and equipment from its office in Rancho Cordova (Sacramento County), California. MrSunshine.com is for sale; the owner is asking $4,995. MrSunshine.solar probably cost between $25 and $35 for a year’s registration. Yes, Mr. Sunshine could have bought MrSunshineSolar.com (it’s still available), but I’d argue that the newer domain extension makes the name more distinctive, not less.

Outlive.life flashed across my TV screen at the end of a promotion for Self/less, a thriller starring Ryan Reynolds that opens in July. It functions more as a tantalizing tagline than as a brand: it redirects to SelflessMovie.tumblr.com.

I used the Iceland ccTLD, .is, when I named Post + Beam, which calls itself an innovation agency. Not only is a nontraditional domain a good fit for an innovator, but .is also lends itself to sentence creation: Post + Beam is communication. Post + Beam is design.

A friend of mine snapped up an .xyz domain for her personal account as soon as the domain became available. “It’s distinctive and a little quirky, and I like that,” she told me.

And here are some gTLDs I’d love to see used creatively:

For those of you who insist that no substitute for .com can ever be taken seriously—well, a colleague of mine likes to point out that there was a time not long ago when only telephone numbers prefixed with 1-800 were recognized as toll free. Somehow, we managed to get used to upstarts 1-877, 1-855, and 1-888. And we’re going to get used to .tips, .repair, .desi, .ooo, and all the other gTLDs, too.

If you’d like to check the availability of one of the newer domains, try Instant Domain Search, which lists many (but not all) of the popular gTLDs.

My customary caveat about domains applies to gTLDs as well: Don’t assume that just because a domain is available the brand name is legally available. Do a thorough search (a trademark lawyer is your best friend!), and don’t risk an expensive trademark challenge when you’re getting a baby business on its feet.