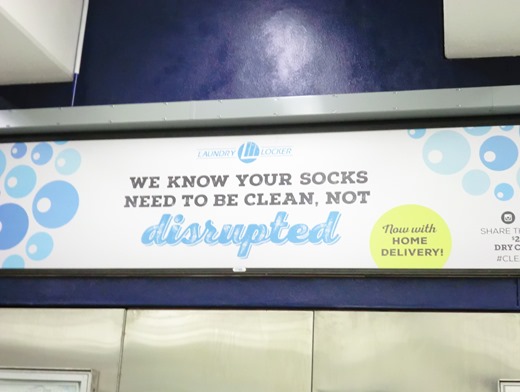 “We know your socks need to be clean, not disrupted.” Ad for Laundry Locker, Embarcadero BART station, San Francisco.

Yes, other new-model laundry services—like NimNim and Washio—do claim to “disrupt” laundry. In plain language, this means you press a little picture on your mobile phone and in short order someone picks up your laundry and returns it clean and folded. (Presumably, while this is going on you are doing some world-changing disrupting of your own.) The Laundry Locker ad acknowledges the shocking truth: consumers don’t care about your business model. We just want to wear clean clothes.

That’s refreshingly modest. But it seems you can’t ignore the forces of disruption forever:

A much younger startup, Oakland-based Even—its product, an app, is still in beta—is also subverting the disruption gospel. The company functions as a financial safety net for hourly and part-time workers whose incomes fluctuate. Here’s how a story in the May 3, 2015, issue of the New York Times Sunday Magazine summed it up: 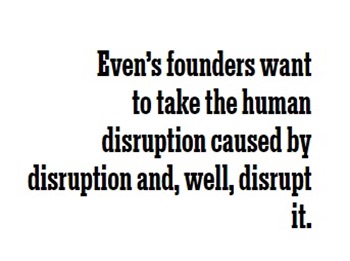 Linguist Geoff Nunberg took on “disruption” in an April 27 commentary that aired on NPR:

These days, people just use “disruptive” to mean shaking things up, though unlike my kindergarten teacher, they always infuse a note of approval. As those Tech Crunch competitors assured us, disruption makes the world a better place. … But by the time a tech buzzword has been embraced by the fast food chains, it's getting a little frayed at the edges. “Disruption” was never really a new idea in the first place, just a new name for a fact of life as old as capitalism. Seventy years ago the economist Joseph Schumpeter was calling it the “gales of creative destruction,” and he just took the idea from Karl Marx.

But many of us have been predicting the downfall of “disruption” for some time now. Here’s something I wrote in 2012 for the Visual Thesaurus:

In fact, “disruption” — the word, if not the practice — has become so ubiquitous that it’s already on the downslope to buzzword status. Earlier this year BetaBeat, The New York Observer’s technology column, included “disruptive” in its list of “20 buzzwords that deserve to die.” In September, The Atlantic Wire quizzed a panel of “tech-savvy editors and reporters” about the meaning of several jargon-ish phrases, including “disrupting the disruptors.” “Someone horrible probably said that,” ventured one respondent.

“If you've been thinking about putting [disruption] into your tagline or mission statement,” I cautioned, “you may just want to disrupt that thought.”

Alas, my readership is modest, and the fans of “disruption” are legion. I may have to wait a few more years to say “I told you so.”

Posted at 06:33 AM in Advertising, Buzzwords, Journalism | Permalink

I presume you read Jill Lepore's article in the NYer a little while ago in which she makes the claim that the whole "disruption" isn't even really much of a thing. Not that that has much linguistic relevance, I suppose, other than that she seeks to disrupt the idea of disruption.

Mike: I did read Jill Lepore's article (http://www.newyorker.com/magazine/2014/06/23/the-disruption-machine), and thank you for reminding me about it.

*snort*
Oh, this one is EVERYWHERE, and it's so annoying. My niece is looking for work after grad school, and some of the ads even say they're looking for "disrupters." Really? NO, THEY ARE NOT. No one wants anyone to swan in and change everything about the way they work. And really, no one person can do that unless they're the boss. *sigh*