« May Linkfest | Main | On the Visual Thesaurus: Pout and Smile »

Trilby cropped up last week in responses to an item about a New York Mets promotion:

For the love of God, somebody please stop the Mets from giving away free fedoras tomorrow http://t.co/JbgkkNRqbC pic.twitter.com/iTIcRr5cmF

The hat in the photo is not a fedora but rather a trilby: the short brim is the key distinction. (You’d think a magazine once known as Gentlemen’s Quarterly would have been quicker to notice.) 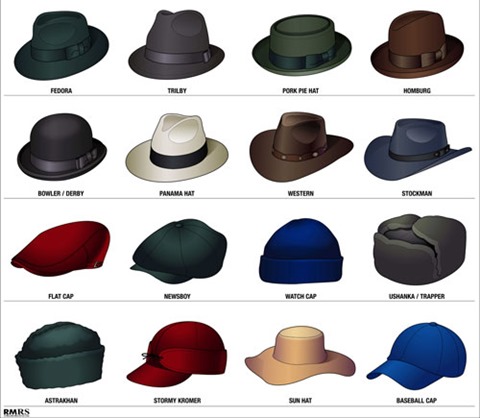 From a reminiscence by the novelist John Le Carré published in the September 29, 2008, issue of The New Yorker:

The A.I.O., however, had opted for the more traditional spy’s attire: fawn raincoat and trilby hat, which, together with his military mustache, gave him, to my callow eye, a rather too British look.

It’s worth mentioning that the fedora hat style is also named for a female character in a 19th-century stage play. Fédora—the name is the Russian equivalent of “Theodora”—was written in 1882 for the great actress Sarah Bernhardt, who wore a center-creased soft felt hat in the role. “Due to the fedora’s linking with a public figure who was assertive, sexually liberated and took on masculine roles, the women’s rights movement adopted it as a symbol and from there it spread to women in general,” writes Robert Rath in a 2014 issue of The Escapist. It took a while for fedoras to cross over to menswear.

Trilby—the 1894 novel and subsequent play—also inspired a shoe style (in the novel and play, Trilby’s feet were much admired). “Trilbies” became a colloquialism for “feet.” 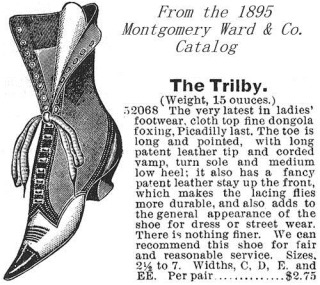 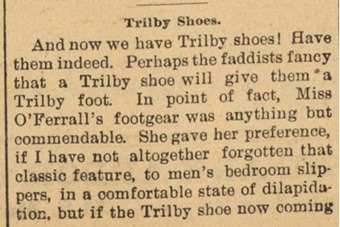 Trilby was a brand of shoe polish. 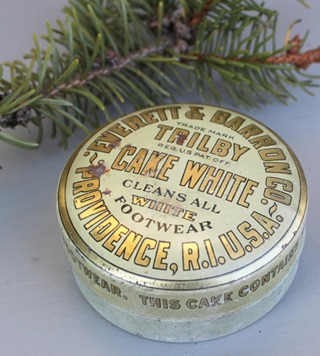 In 1901, the mayor of Macon, Florida, renamed the town Trilby “after the heroine of a story which has lately deeply moved me.” The U.S.S. Trilby, a U.S. Navy patrol vessel in commission during 1917, was also named after the fictional heroine.

Posted at 06:07 AM in Books, Fashion, Naming, Shoes, Sports, Theater, Word of the Week | Permalink