« Vote for Fritinancy! (And for Strong Language, Too) | Main | Word of the Week: Linear TV »

Name in the News: Slack

Almost overnight, it seems, the world has fallen head over heels for Slack.

“I am basically in love with Slack,” declares About.me founder Tony Conrad in a testimonial on Slack’s home page. “Slack, a messaging tool designed for team collaboration, is the working digital world’s latest paramour,” writes Scott Rosenberg in an admiring article published earlier this month on Medium (“Shut Down Your Office. You Now Work in Slack”). “Slack is the new favourite tool of newsrooms” reads a headline in Digiday, which calls itself “the authority on digital media.” In April, Slack’s co-founders won a Crunchie—one of the technology awards bestowed each year by TechCrunch—for founder of the year. Slack is also the investment world’s BFF: launched less than two years ago, it has only about 750,000 daily users—more than two-thirds of whom pay nothing for the service—but is worth $2.8 billion, according to Business Insider. Chart via Business Insider (May 19, 2015), which is shaky on its spelling of Pinterest.

The numbers and accolades are impressive. But how does that name—Slack—stack up?

It’s a counterintuitive choice, to say the least.

The word slack comes to us virtually unchanged from Old English slæc, where it was an adjective meaning—as it still does—“remiss, lax, characterized by lack of energy, sluggish, indolent” as well as “languid; slow, gentle, easy.” (Source: Online Etymology Dictionary.) The noun form, meaning “cessation,” was introduced in the early 14th century; another slack (chiefly British) means “bog” or “morass.” The back-formed verb (“to fail to exert oneself”) is attested from the mid-16th century. Current dictionary definitions include “lacking in activity; not busy,” “lacking in diligence,” and “to avoid work.” In Jamaican English, slack means “immoral, unprincipled, or improper.”

With the possible exception of “easy,” those are not the sorts of associations assumed to be compatible with business productivity.

There are a number of slack idioms, and they aren’t much more positive. Slack tide occurs between high and low water, when current is close to stationary. Slack-baked means “baked imperfectly.” Slack-handed is another way of saying “remiss.” Slacks—a synonym for “trousers” since the early 19th century—is one of those words frequently cited as a cause of the intense and irrational loathing known as “word aversion.” Women are encouraged to add “slack arm flesh, or bat wings” to their already long list of physical anxieties.

True, slack-key music (a translation of Hawaiian ki ho'alu) can be pleasant to listen to, and the performance of a slack-wire walker can be thrilling to watch. But a slacker is someone who shirks work (or military service). And then there’s slack-jawed, for which Urban Dictionary helpfully supplies a cloud of related words that includes idiot, fucktard, zombie, and waste of skin.

Cletus the Slack-Jawed Yokel, from “The Simpsons.”

Some folk'll never eat a skunk,
But then again, some folk'll
Like Cletus the Slack-Jawed Yokel!

(Lyrics from the Simpsons wiki. I am crazy about that folk’ll/yokel rhyme.)

The business-communications company Slack, which is based in San Francisco, began life as an internal tool used by Tiny Speck, a gaming company that produced a game called Glitch. The ostentatiously humble “Tiny Speck” and the downright perverse “Glitch”—the word means “malfunction,” and probably comes from Yiddish, as language maven Ben Zimmer tells us—give us clues about the naming preferences of the Slack team, headed by Flickr co-founder Stewart Butterfield. Not for them the geeky, earnest, or nonsensical names of competitors like Bitrix24, HipChat, or Yammer. They’re affecting something altogether different—something akin to what Richard Branson did in naming his business empire Virgin, a word that equates with “inexperienced” but which, because of the companies’ successes, has come to connote “brilliant.”

Slack’s founders have been cryptic about their own motives and reasoning. This is all the company has revealed about the name:

Our name may seem funny, but think on this: without slack, there is no reach, no play, no flexibility, no learning, no evolution, no growth.

Every organization needs some slack.

I have an alternate theory.

Maybe, just maybe, Slack’s founders are making a winking reference to another Slack—the one enshrined (but never defined) by the Church of the SubGenius, a parody religion that’s been around since the 1970s (although official church doctrine maintains that it was founded in 1953 by J.R. “Bob” Dobbs, who’s known as High Epopt and Living Slack Master*) and whose adherents include the actor Paul Reubens (aka Pee-wee Herman) and the musician Mark Mothersbaugh (of the cult band Devo).

Here’s a snippet of the Wikipedia entry on Church of the SubGenius (footnotes stripped out):

The Church of the SubGenius’ literature incorporates many aspects of conspiracy theories, teaching that there is a grand conspiracy at the root of all lesser ones. It records that there are many UFOs, most of which are used by the conspiracy leaders to monitor humans, although a few contain extraterrestrials. …

SubGenius members believe that those in the service of the conspiracy seek to bar them from “Slack”, a quality promoted by the Church. Its teachings center on “Slack” (always capitalized), that is never concisely defined, except in the claim that [alleged founder] Dobbs embodies the quality. Church members seek to acquire “Slack” and believe that it will allow them the free, comfortable life (without hard work or responsibility) that they claim as an entitlement. Sex and the avoidance of work are taught as two key ways to gain “Slack”. Davidoff believes that “Slack” is “the ability to effortlessly achieve your goals”. 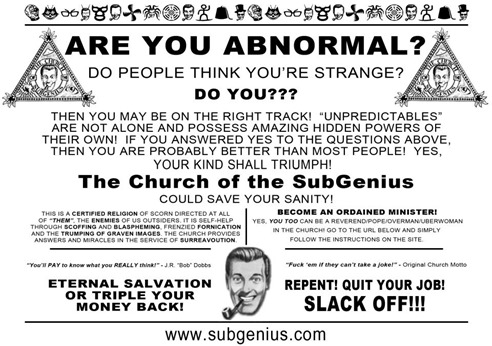 Save your sanity? Free, comfortable life? Effortlessly achieve your goals? Could this be the true story of tech “unicorn” Slack?

I can’t say for sure, but I want to believe.

UPDATE: On Twitter, Cory Bryan alerted me to a more plausible (and also more boring) rationale for the Slack name. Slack is a concept associated with agile development, a term coined to describe an approach to creating software but which is now used in project management as well.

I was familiar with agile (or Agile, as it’s sometimes styled), but not with agile slack. Cory directed me to a 2012 post, “Slack to the Rescue,” that’s about agile development, not Slack the company (which hadn’t yet been founded). Here’s an even earlier description of agile slack from a 2008 book, The Art of Agile Development:

Imagine that the power cable for your workstation is just barely long enough to reach the wall receptacle. You can plug it in if you stretch it taut, but the slightest vibration will cause the plug to pop out of the wall and the power to go off. You'll lose everything you were working on.

I can't afford to have my computer losing power at the slightest provocation. My work's too important for that. In this situation, I would move the computer closer to the outlet so that it could handle some minor bumps. (Then I would tape the cord to the floor so people couldn't trip over it, install an uninterruptable power supply, and invest in a continuous backup server.)

Your project plans are also too important to be disrupted by the slightest provocation. Like the power cord, they need slack. ...

Posted at 07:07 AM in How They Got That Name, Humor, Names in the News, Naming, Religion, Technology | Permalink