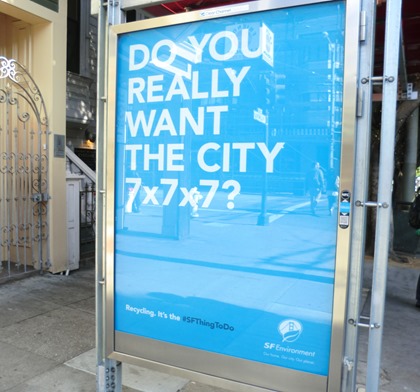 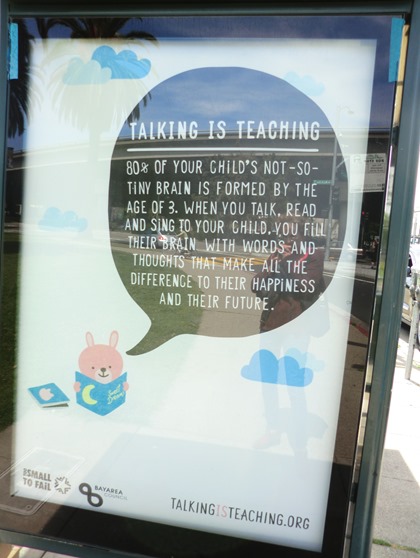 This one isn’t a riddle like “7 x 7 x 7.” But it still stumps me. I can’t figure out why a pro-language organization is using such a hard-to-read ad: all caps, with an awkwardly hyphenated compound modifier in the first sentence and a breathless 28-word second sentence that begins with a long dependent clause.

Think about the intended audience for that ad. Bus-takers, for starters, and in my town that generally means people with limited means—people who don’t have large home libraries or a lot of leisure time for reading to their kids. (Rich people, after all, probably don’t need to be reminded to talk and read to their kids. At the very least, they can outsource the job to a TaskRabbit.) It’s the children of poor parents who end up with that 30 million word gap in their vocabularies. Those parents may have no more than a high school education, may be working double shifts, and may not have received a lot of Mommy-and-me lullaby time during their own childhoods. I am skeptical that those overworked parents are going to stand in rapt contemplation of this bus-stop saga, letting its verbosity wash over them, and then say to themselves, “Why, yes! This is what’s been missing in my otherwise-idyllic family life—more Dr. Seuss!”

(Off-topic aside to Talking Is Teaching: Don’t give your child-friendly campaign a name that can be acronymized as TIT.)

Let’s go back to the first ad. To decipher its meaning—which, by the way, has nothing to do with “24/7,” my first guess—you need to know three things:

1. “The City” is how (some) people in the Bay Area refer to San Francisco. It's an old usage, and it may be dying out. Unfortunately, the all-caps text doesn’t tip us off that it’s not just any city but the City.

3. The tagline—“Recycling. It’s #TheSFThingToDo”—refers to garbage recycling, which is something of a fine art in San Francisco.

On top of all that backstory, you need to mentally insert “to be” after “the city” (or the City) for the question to make any sense at all.

And here’s the (anticlimactic) solution to the puzzle:

“Do You Really Want San Francisco to Be Buried by a Seven-Mile-High Pile of Unsorted, Unrecycled Garbage?”

I don’t care how delayed the Muni bus is. That ad takes too damn long to translate.

Advertising work for nonprofits is often a pro-bono effort. Still, the absence of a paycheck doesn’t excuse muddled messaging. Think of how much more effective the recycling poster could have been with an image of garbage crawling up the sides of the Transamerica Pyramid, or with a terse, attention-grabbing headline: DON’T TRASH S.F.

As for Talking Is Teaching, I’d prefer to see appealing photos of kids accompanied by short, to-the-point headlines:

Conclusion: Puzzles are fun, but when you’re raising awareness—or money—clarity is better.

These are just mind-numbingly draining, and are perfect examples of what I (as a jaded NY/Seattle expat now in flyover country) think of as Bay Area hip/clever/sincere marketing that only winds up being smug and opaque.