« On the Visual Thesaurus: Thanks for Sharing? | Main | Word of the Week: Hokey »

Don’t read “How to Name a Baby” to learn how to name a baby. Read it for insights into historical baby-naming trends and to confirm your hunches (e.g., “the popular girl name Reagan is for Republicans”). Also: charts!

Given names are “one of the last social acceptable frontiers of class war.”Also: nominative determination, implicit egotism, and how the Internet has made baby naming more difficult. Part 1 of a four-part podcast series about names from Australian radio network ABC. The presenter, Tiger Webb, has an interesting name story himself. (Hat tip: Superlinguo.)

The not-so-secret jargon of doctors is full of acronyms: a flea—fucking little esoteric asshole—is an intern, an FLK is a “funny-looking kid,” and an “SFU 50 dose” is the amount of sedative it takes for 50 percent of patients to shut the fuck up.

Ever wonder what value-creating winners do all day? Here’s Business Town to enlighten you. It’s “an ongoing project attempting to explain our highly intangible, deeply disruptive, data-driven, venture-backed, gluten-free economic meritocracy to the uninitiated. With apologies to Richard Scarry.” 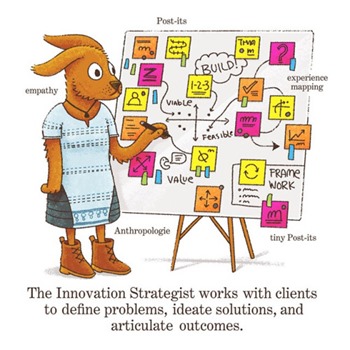 Stop your whinging, Brits: a lot of those so-called Americanisms you profess to detest—like “gotten” and “fall”—were originally English.

The spectacular neon art of the Walker Collection of American Signs, a swath of advertising history auctioned earlier this month in Proctor, Arkansas.

Attention, domain shoppers and everyone who believes the best defense is an offensive offense: the .sucks domain went on sale in early April. There was an immediate buying frenzy; consumer advocate Ralph Nader promoted it in a commercial as “a protest word.” Now ICANN, the Internet Corporation for Assigned Names and Numbers, has asked U.S. and Canadian regulatory agencies to determine whether the the domain’s high price—$2,499 during the “sunrise” period—is illegal. (For more about the unusual relationship between Vox Populi—which secured the rights to sell the .sucks domain—and ICANN, see John R. Levine’s blog.)

“The decision is made. The name won’t be changed.” – Tim Mahoney, head of marketing for Chevy, speaking to the Detroit Free Press about the Bolt electric vehicle, whose name is strikingly similar to that of the Chevy Volt plug-in hybrid. In fact, a Spanish speaker would pronounce the two names identically. (Hat tip: Jonathon Owen.)

I’ve been saying this for ages, but now I can quote the Harvard Business Review: Group brainstorming is a waste of time.

“A brand of snack bars is made ‘in small batches at our own makery’. Makery? I am guessing that ‘makery’ is a portmanteau for ‘made-up bakery’.” Steven Poole on why the language of food packaging makes him sick. (Hat tip: Lynne Murphy.)

Remember wack slacks, lamestain, and swingin’ on the flippity-flop? Of course you don’t. Why grungespeak was the greatest language hoax of the 1990s.

Negative polarity item, critique drift, and other terms—many of them linguistic—that have caught the eye of tech writer/editor Mike Pope.

Lindström, Minnesota, is getting its umlaut back.

And don’t forget all those gratuitously umlautted brand names!