« Word of the Week: Libel Tourism | Main | Signs of Weirdness »

I’ve been collecting examples of strikethrough in print advertising for several years now.. The latest examples to have caught my eye are ads for the PBS production of “Wolf Hall,” based on the Hilary Mantel novels about Thomas Cromwell, Henry VIII, and Anne Boleyn. (This is not the production that’s currently on the stage of the Winter Garden in New York; that’s the Royal Shakespeare Company’s version, starring Ben Miles as Cromwell. Yes, it’s a happy season for Tudorphiles and fans of Hilary Mantel’s excellent prose.)

These half-page ads appear sequentially on pages 11, 13, and 15 of the April issue of The Atlantic. 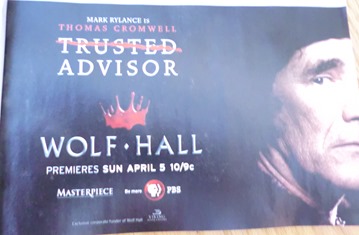 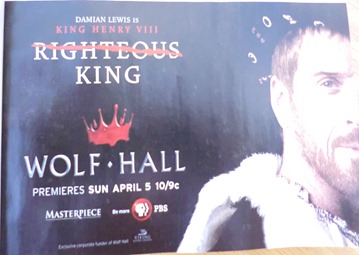 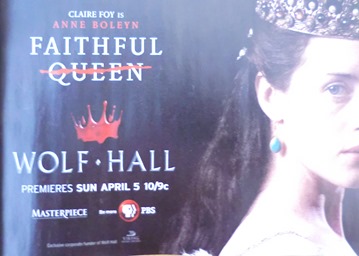 (That’s Anne Boleyn, which makes the strikethrough a bit confusing. Anne’s queenship wasn’t in question; her fidelity was another matter. She was, after all, convicted of adultery and was known as “the goggle-eyed whore” to her detractors, who were legion.)

It’s hard to tell from my crappy photos, but the red slashes are jagged, and their irregular edges make the text appear to have been slashed with a knife rather than crossed out with a pen.

Still, the ads are definitely of a piece with past examples such as “She’ll never dance again,” as seen in a long-running ad for National Jewish Health.

I admit this trope fascinates me. Why accounts for its popularity? Why are so many creative directors choosing—or falling back on—this device?

Gretchen McCulloch, a Canadian linguist who writes for a general audience, is also paying attention. Gretchen wrote last year about a slightly different use of strikethrough text. One of her readers had asked her: “On Tumblr, do we use strikethroughs sometimes instead of parentheses? I'm not sure I fully understand what strikethrough text *means*.”

My impression of strikethrough* text on Tumblr is that it’s used to “delete” something while still actually saying it, providing a sense of “plausible deniability” around expressing whatever you’ve put in the strikethroughs. …

You do want to make sure that people see it […] but you want them to realize that you’re slightly embarrassed or not fully comfortable saying it. Alternatively, you are actually fully comfortable admitting something, but you’re using strikethrough as a comedic device to give the appearance that you don’t want to admit it, and trusting people to get this extra layer. I think the earliest or most central use of strikethrough is to contract yourself, so you can be saying one thing and meaning something different (although you’re actually saying both).

tl;dr: Strikethrough is kind of like muttering-while-blushing or your inner thoughts temporarily making themselves heard.

(The asterisk is Gretchen’s; it leads to a note about viewing formatting on mobile devices.)

That’s a good explanation of strikethrough text in informal first-person writing. (I’d add that strikethroughs can also alert readers to editorial correcctions corrections.) But I suspect something else is going on with the ad copy.

Yes, an “extra layer” is implied, and a dual meaning is certainly intended. But in the Masterpiece ads the deleted-but-still-visible text communicates isn’t communicating embarrassment or ambivalence. It’s saying “That was then, this is now”: Cromwell was trusted at one time, but no longer. We can preview the whole violent history at a glance.

Elsewhere, strikethroughs in ads say “You may have thought this; now you’ll think that,” or even the hoary “New and improved!” Or it can mimic a to-do list. 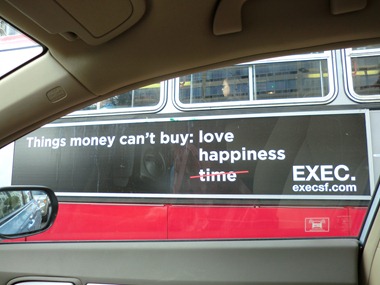 It’s a knowing wink, not a blushing coverup.

It’s conceivable that this trope could have caught on in the pre-Internet era, but I submit it’s unlikely. Strikethroughs belong to a whole class of interesting linguistic devices that have been created for, and are flourishing on, the 21st-century Web. For an excellent overview, see Clive Thompson’s recent piece on Medium, “That Way We’re All Writing Now.” Thompson doesn’t touch on strikethroughs, focusing instead on new twists in syntax like “I’ve lost the ability to can” or “That moment when you tweet about that moment” or “Because [X].” But strikethroughs fit nicely into his argument.

Thompson posits that these gambits, when used with a savvy audience, can create “a little puzzle” that’s pleasurable to solve. And that’s a good thing, Thompson writes:

I’m a fan of all the betentacled linguistic lifeforms that have emerged from our cambrian explosion online. These days, people write insanely more text than they did before the Internet and mobile phones came along. So the volume of experimentation is correspondingly massive and, for me, delightful.

Playful, economical, dramatic: the strikethrough tells complex stories with few words and just one punctuation mark. See how Dictionary.com lexicographer Jane Solomon employed it on Twitter in response to my tweet about the Masterpiece ads:

Because “Theatre”? It was dropped from the name in 2008. Puzzle: solved.

Posted at 06:54 AM in Advertising, Strikeout, Television, Trends | Permalink

Well-known sportswriter Rick Reilly, when he was a columnist for Sports Illustrated, wrote a hugely influential column about a rivalry between two hockey teams in 1999. Since Reilly is a Colorado resident, he showed his bias for his hometown team -- and disdain for Detroit, Colorado's rival -- by using strikethroughs. He used them exactly as Gretchen described: He got to call them names, used the strikethrough to "delete" the name, and then ran a slightly less unpalatable description.

He was the first one I'd seen to use the device, and the piece was so widely celebrated, and imitated, for the next few years it became "a thing." I know it sounds suspect to credit one person, but Reilly won the national sportswriter of the year award ELEVEN times, so he was the closest thing sportswriting had to a rock star. I can't find his original column, but I did see a blog post noting the strikethrough column and saying it was a fad that should fade -- and the blog post was written in 2004.

I usually see the strikethrough as a weak, cover-your-ass device; an unsubtle nudge-nudge to ensure something witty is understood.