« Cadillacs Mixed Message | Main | On the Visual Thesaurus: Why Do So Many Brand Names End in -ly? »

Word of the Week: Gyges Effect

Gyges effect: The way in which the Internet “can encourage a disinhibition people simply would not experience face to face.” (Claire Hardaker, The Guardian, August 3, 2013) Gyges is often Anglicized to “JAHY-eez” (source: Dictionary.com) or “JAHY-jeez.”

The Gyges effect takes its name from a story related in Plato’s Republic about the Ring of Gyges, which bestowed the power of invisibility on the wearer. Gyges was a historical king of Lydia, but the story centers on a mythical shepherd said to be Gyges’ ancestor; in the tale, the shepherd uses the cloak of invisibility to seduce the queen, murder the king, and seize the throne. In recounting the tale, Plato’s brother Glaucon asks “whether any man can be so virtuous that he could resist the temptation of being able to perform any act without being known or discovered,” and concludes that morality is a social construct.

The Ring of Gyges has taken on metaphorical significance in the Internet era. In an opinion piece about “the epidemic of facelessness” published in the New York Times on February 15, 2015, Stephen Marche writes about “the faceless communication social media creates, the linked distances between people, both provokes and mitigates the inherent capacity for monstrosity”:

The Gyges effect, the well-noted disinhibition created by communications over the distances of the Internet, in which all speech and image are muted and at arm’s reach, produces an inevitable reaction — the desire for impact at any cost, the desire to reach through the screen, to make somebody feel something, anything.

The earliest reference I found to this definition of “Gyges effect” is in a 2011 paper by David R. Iverson, a lieutenant colonel in the U.S. Air Force, “The Ring of Gyges: Anonymity and Technological Advance’s Effect on the Deterrence of Non-State Actors in 2035.” However, an nGram search reveals steep spikes in references to “Gyges” throughout the 20th century. I wasn’t able to pinpoint sources of these pre-Internet references—any suggestions? 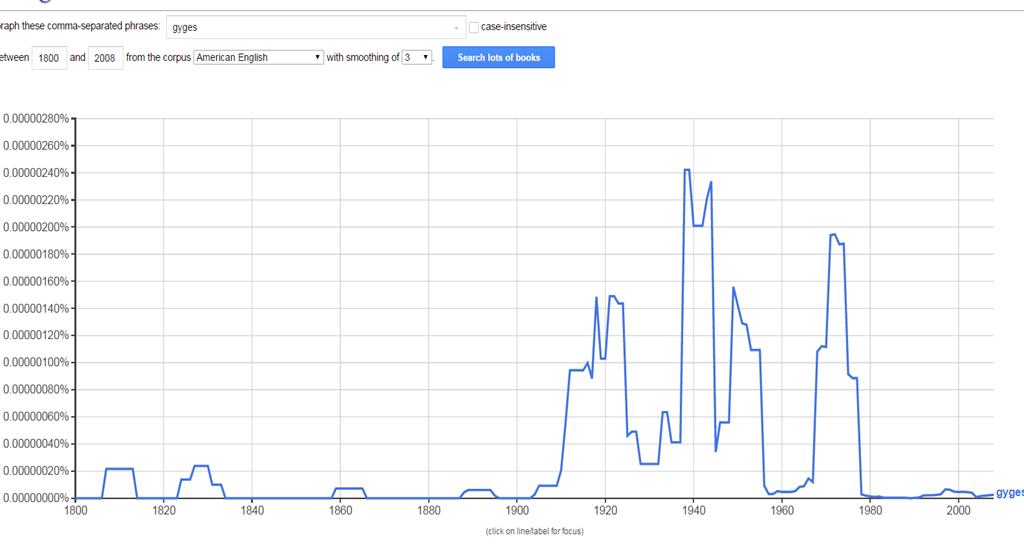 Posted at 06:53 AM in Eponyms, Greek, Technology, Word of the Week | Permalink