Word of the Week: Hobson-Jobson

Hobson-Jobson: The title of a lexicon of words of South Asian origin, compiled by Henry Yule and A.C. Burnell, that were used by the British in India. The title is the English rendering of “yā ħassan! yā ħussayn! (“O Hassan! O Hussein!”), a cry uttered by Shia Muslims during religious processions. By extension, Hobson-Jobson can mean any alteration of a word or phrase “borrowed from a foreign language to accord more closely with the phonological and lexical patterns of the borrowing language, as in English hoosegow from Spanish juzgado.” (Source: Dictionary.com.) Hobson-Jobson can also refer to a game in which competitors use as many Anglo-Indian words as possible in a sentence. 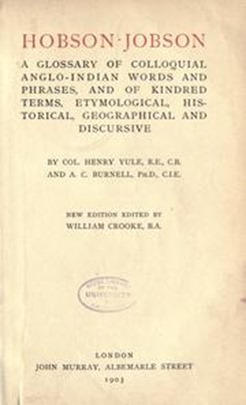 The cover of the 1903 edition of Hobson-Jobson. First published in 1886, the book has never been out of print; the most recent edition was published in 2013 by Oxford University Press. (The publisher describes it as “a unique work of maverick scholarship.”) The text is also available online at Open Library.

Hobson-Jobson is invoked in Tom Stoppard’s 1995 play Indian Ink, currently enjoying a revival (with rewritten ending) at San Francisco’s A.C.T. (It’s the same production—with the same director, Carey Perloff—that played last autumn at New York’s Roundabout Theatre Company. I saw a preview performance in San Francisco, and was enthralled throughout the nearly-three-hour running time.) The play weaves together the stories of a fictional English poet and freethinker, Flora Crewe, visiting Jummapur, India, in 1930; and her elderly sister, Eleanor, whose scenes are set in England in the mid-1980s. In Act I, an Indian artist, Nirad Das, asks to paint Flora’s portrait, and their conversations cover art, politics, and what it means to be Indian and English. At one point they take a break:

Flora and Nirad are playing Hobson-Jobson, an Indian-English word game in which each player tries to use as many hybrid words as possible in a sentence. They discuss language and the increasingly important role English has played in India, particularly in making possible the growing nationalist movement.

In a story about the 2013 edition of Hobson-Jobson, BBC News excerpted some of Flora and Nirad’s dialogue:

Flora: "While having tiffin on the veranda of my bungalow I spilled kedgeree on my dungarees and had to go to the gymkhana in my pyjamas looking like a coolie."

Nirad: "I was buying chutney in the bazaar when a thug who had escaped from the chokey ran amok and killed a box-wallah for his loot, creating a hullabaloo and landing himself in the mulligatawny."

After several rounds, Flora delightedly exclaims to Nirad: “You know your Hobson-Jobson!”

(Amok, by the way, is a borrowing from another Asian language, Malay; it entered English in the late 17th century.)

Many of the words that seemed exotic to Yule and Burnell—bungalow, bazaar, thug—have of course been fully integrated into standard English. But, as Pico Iyer observes in an essay that accompanied the 1999 A.C.T. production, many remain curiosities:

[A] whole world comes into view when one reads that a “Lady Kenny” is a Ablack ball-shaped syrupy confection named after the Lady Canning to whom it was first presented, and a “James and Mary” is the name of “a famous sandbank in the Hooghly River behind Calcutta.” Every inflection of what was once known as Butler English and Kitchen English is spelled out with a gravity worthy of the facts of life, and besides reading solemn explications of “pish-posh” and “ticky-tock” and the derivation of “burra-beebee,” you can learn that “a four and twenty” meant “a criminal” and “ducks” referred to the “gentlemen belonging to the Bombay service.” “Home,” the venerable archive informs one, “in Anglo-Indian and colonial speech ... means England.”

Posted at 08:41 AM in Dictionaries, India, Theater, Word of the Week | Permalink