Word of the Week: Growlette

Growlette: A reusable 32-ounce jug, usually glass, that can be filled with beer or other beverages. Formed by adding a diminutive suffix to growler, the 64-ounce version of the jug.

The earliest citation I’ve found for growlette—and a possible source for the coinage—is from August 2011, when Throwback Brewery, in New Hampshire, posted an announcement on its blog:

We have a new, smaller growler coming in time for the tasting hours on Thursday, September 8th! These new growlers are very cute 32 oz flip-tops (approx. 1/2 the size of our original growler), so we decided to give them a name – “growlettes”. We love these new bottles. They are slim enough so that you can fit several into your fridge without requiring displacement of core food items (although we think beer is a core food item

Growler came into American English around 1885, during a period when many communities prohibited the sale of alcohol on Sunday; the 64-ounce vessel allowed “the tippler to stock up,” according to the Online Etymology Dictionary. Early growlers were metal pails; the American Heritage Dictionary gives the etymology thus: “from the sound made by carbon dioxide escaping from under the lids of metal pails in which beer was carried in the past.” (More history here. See the Online Slang Dictionary for lewd and scatological definitions of growler unrelated to beer.)

The growth of the craft-beer industry in the United States has given a corresponding boost to growlers and growler lingo. There’s a magazine, The Growler, devoted to craft beers; The Growler Bites & Brews, a craft-beer pub in lower Manhattan, opened in 2011; the Portland Growler Co., in Oregon, has been making ceramic growlers since 2010. 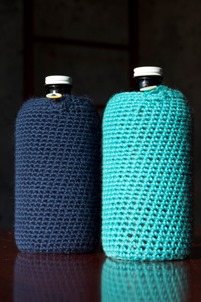 I discovered growlette via a thread on the American Dialect Society’s listserv. In the original post, dated January 6, 2015, Benjamin Barrett wrote that Haggen, a grocery store in Bellingham, Washington, “has kombucha growlers (64 oz) and growlettes (32 oz) for sale.” Kombucha is a fermented but nonalcoholic “living drink” made by “fermenting green and black tea with sugar and the Kombucha culture known as  S.C.O.B.Y. (Symbiotic Colony of Bacteria and Yeast),” according to the Haggen website.

Victor Steinbok responded to Barrett’s email with this post:

It's generally agreed on tge [sic] craft beer scene that “growler” is reserved for the 64 oz./ 1/2 gal / 2 liter glass or metal container and, in some states, like Florida, that allow it, 1 gal glass jugs. It has to be resealable, for beer purposes, thus is usually a pop-top (a.k.a. flip-top or swing-top) or screw-cap.It is also generally agreed that there's no unique agreed-upon name for the small containers. Growlette is mildly popular but is often met with derision as "effeminate". "Half-growler" and "small growler" are more popular. The standard avoidance convention suggest just listing "growler" and specifying the capacity.

And Barrett followed up with a list of other non-beer beverages being poured into growlers, including cider, soda, and coconut water.

Virtually every large city, notable landscape feature, creature and weather pattern of North America — as well as myriad other words, concepts and images — has been snapped up and trademarked as the name of either a brewery or a beer. For newcomers to the increasingly crowded industry of more than 3,000 breweries, finding names for beers, or even themselves, is increasingly hard to do without risking a legal fight.

The accompanying illustration is amusing and instructive.

Posted at 09:42 AM in Beer, Neologisms, Suffixes, Word of the Week | Permalink

My daughter, who is my source of information about all things hipster, said that she has not heard this term, but observes that that's probably what they would call the bottle what they sell ginger beer in at the hipster ginger beer places:

... which are very hip. (Observe quasi-lumbersexual in photo.)

I could take it upon myself to do field research on this topic, since, in spite of its offputting hipster aura, Rachel's ginger beer is actually quite good. :-)

Mike: That is indeed what Rachel's Ginger Beer calls those distinctively shaped bottles:

There's nothing like a moist growlette on a hot day, I suppose.