This month Scratch Magazine, an online publication “about the intersection of writing and money,” celebrates its first anniversary. In “Scratch,” founder and publisher Jane Friedman (to whom I’m not related) nailed the perfect dual-meaning title: scratch has been an informal synonym for write since at least the early 19th century, and it’s been a slang term for “money” (especially paper currency) in the U.S. since the early 20th century.

And speaking of “nailed it”: 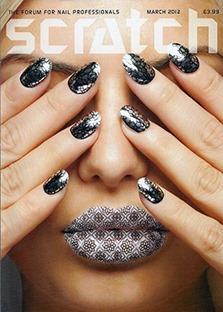 This Scratch is a British “forum for nail professionals.” The title suggests an edgy itch and a means to satisfy it. Photo by Brandon Showers.

Scratch was also the title of a magazine about creating hip-hop music that launched in 2004 and folded in 2007. In this case the title evoked the needle scratches that are part of the sound of classic hip-hop. 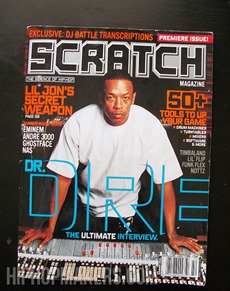 Scratch is an old and richly polysemous word. It entered English around 1400 as a verb meaning “to superficially wound by dragging the claws or fingernails across the skin.” The Online Etymology Dictionary says it was “probably a fusion of Middle English scratten and crachen, both meaning ‘to scratch,’ both of uncertain origin.” The noun form came along in the mid-16th century.

But sticking to the single meaning of “scraping” (paper, skin, vinyl records) is just scratching the scratch surface. Scratch could also be the title of:

The magazine of canceled plans. To scratch has meant “to abandon” or “to scrap” since the early 20th century. The Oxford English Dictionary’s earliest citation is from P.G. Wodehouse’s The Inimitable Jeeves, published in 1923.

The journal of impromptu sporting events. Scratch has been an adjective meaning “hastily assembled” since the middle of the 19th century, when it was applied to cricket teams.

The magazine for cooks who don’t used store-bought ingredients. “From scratch” was originally a sporting term, first documented in 1866, meaning the starting point in a handicap of a competitor who receives no odds. It eventually extended its meaning to “from nothing,” as in “a cake made from scratch” or “a company built from scratch.” (From Scratch is, in fact, the name of a radio show “about the entrepreneurial life.”)

Satan’s own periodical. “Old Scratch” and “Mr. Scratch” have been names for the chief devil since about 1740, according to the Online Etymology Dictionary, which gives this word history: “from earlier Scrat, from Old Norse skratte ‘goblin, wizard,’ a word which was used in late Old English to gloss ‘hermaphrodite;’ probably originally ‘monster’ (compare Old High German scraz, scrato ‘satyr, wood demon,’ German Schratt, Old High German screz ‘a goblin, imp, dwarf;’ borrowed from Germanic into Slavic, as in Polish skrzat ‘a goblin’.”

Walter Huston as Mr. Scratch in The Devil and Daniel Webster (1941, originally titled All That Money Can Buy) via TCM (preceded by an ad).

The magazine of wonderment. “To scratch one’s head” has been a metaphor for perplexity since the early 18th century.

A periodical for very good golfers. In USGA terminology, a “scratch golfer” is one whose handicap is zero. From the idiom “up to scratch,” another cricket term, this one dating from the 18th century; this scratch signifies “a line or mark drawn as an indication of a boundary or starting-point.”

The magazine of revenge. In which Simpsons cartoon cat Scratchy finally triumphs over his rodent nemesis Itchy.

Posted at 11:27 AM in Film, Magazines, Naming, Words | Permalink

And I think a person is considered a "scratch" when s/he doesn't end up competing in a sporting event for some reason.

Karen: Yes, that "scratch" is related to the "canceled event" meaning.