On the Visual Thesaurus: Get "Smart"

My January column for the Visual Thesaurus looks at how smart came to be attached to so many inanimate objects, from phones to skin lotion, from bombs to highways, from quotation marks to fabric. Along the way, I consider the multiple senses of this very old word, which can mean “stylish,” “cheeky,” or “to cause pain,” as well as “witty” or “intelligent.”

No subscription needed to view the column this month (not always the case!). Here’s a taste:

The sense of smart = shrewd extends to the slangy smart-ass, which first appeared in print in 1951 in an American detective novel. (OED on smart-ass: “orig. and chiefly U.S.; characterized by an overly clever or smug display of intelligence or [esp. professional] knowledge.”) The term’s mild vulgarity might seem to preclude its incorporation into branding and advertising, but that’s not the case at all. 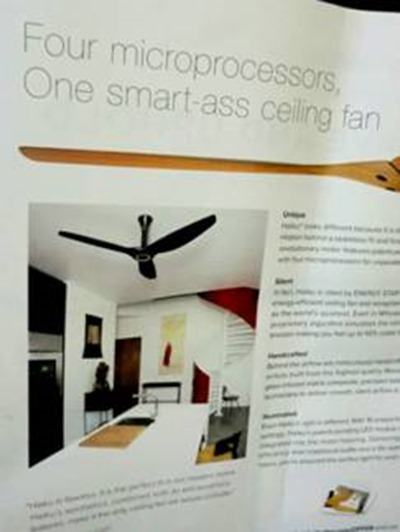 The Big Ass Fans company (whose logo depicts a donkey’s derrière) used smart-ass in a full-page ad in 2013; the term was a jocular reference to the product’s  electronic workings. The company later filed for trademark protection for “Smart Ass Fan.”

Blog extra: A smart gun is one that uses biometrics to recognize its user. New York Times columnist Nicholas Kristof wrote about one such gun for the January 18, 2015, Sunday Review:

Doesn’t it seem odd that your cellphone can be set up to require a PIN or a fingerprint, but there’s no such option for a gun?

Which brings us to Kai Kloepfer, a lanky 17-year-old high school senior in Boulder, Colo. After the cinema shooting in nearby Aurora, Kloepfer decided that for a science fair project he would engineer a “smart gun” that could be fired only by an authorized user.

“I started with iris recognition, and that seemed a good idea until you realize that many people firing guns wear sunglasses,” Kloepfer recalls. “So I moved on to fingerprints.”

Smart guns are “smart” in at least two senses of the word: clever and connected. And yet, Kristof writes, “The National Rifle Association seems set against smart guns, apparently fearing that they might become mandatory.”

1. My husband's professional organization is also called SMART: Secondary Materials and Recycled Textiles (aka rags, or shmatas): http://www.smartasn.org/
2. I remember hearing "smart" used in a slightly new (to me) way in the mid-1980s when business folks were saying things like, "Don't work longer, work smarter."