Name in the Wild: Hue and Cry

I have a soft spot for very old words and idioms that are kept alive in contemporary brand names. Like this one: 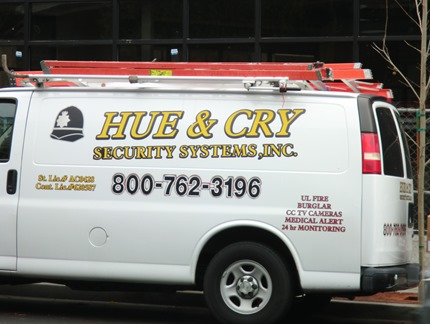 Hue and cry first appeared in English in the late 13th century “as an Anglo-French legal term meaning ‘outcry calling for pursuit of a felon’,” according to the Online Etymology Dictionary, which adds that “the extended sense of ‘cry of alarm’ is 1580s.” It’s a short, distinctive, and perfectly evocative name for a security company.

The hue in hue and cry is an Old French word meaning “outcry, noise, war or hunting cry” (“probably of imitative origin,” says the Online Etymology Dictionary). It’s unrelated to the hue that means “color,” which comes from Old English hiw (“color, appearance”).

For some other brand names derived from very old words—including Bluetooth, Kindle, and Whirlpool—see my August 2014 column for the Visual Thesaurus (no longer paywalled).

Posted at 07:34 AM in In the Wild, Naming, Nicely Named | Permalink