« Tis the Tis the Season Season | Main | Word of the Week: Gefatke »

Words of the Year 2014: Fritinancy Edition

“There seems to be no leading candidate for Word (or Phrase) of the Year,” writes Allan Metcalf, executive director of the American Dialect Society, in the Lingua Franca blog. That lack, he maintains, “will make discussion and voting more lively” at the ADS’s annual meeting in Portland next month. No question that the discussion will be lively—it always is—but I beg to differ about “no leading candidate.” It may not be as controversial as the 2013 selection, because, or as social-media-friendly as 2012’s hashtag, but it’s still the clear front-runner.

My submissions to the ADS vote, to be held January 9:

Word of the year: Ebola.

Most likely to succeed: Budtender.

Least likely to succeed: Oxt weekend, proposed as a way to specify “not this coming weekend, but the weekend after.” Nice try, guys.

Euphemism of the year: Conscious uncoupling, actress Gwyneth Paltrow’s New Age-y term for “my divorce from Chris Martin.” Paltrow made the announcement in March on her website, Goop; later in the year, the term appeared in non-marital contexts, including headlines about a blight-removal project in Baltimore and the transformation of the data-storage industry.

Most creative: Second Amendment. Verbified by columnist Dan Savage and popularized on Twitter. It means, more or less: “This is what your precious right to bear arms gets you, you miserable fools.”

Most productive: -splain. A suffix meaning “to explain in a condescending manner.” A runner-up in last year’s “most productive” category whose time may finally have come. Seen this year in coinages such as bizsplain, whitesplain, parentsplain, Voxsplain, and deathsplain. Mark Peters described the trend in an October 2013 column for the Visual Thesaurus (“‘Mansplaining’ Spawns a New Suffix”); see also my 2010 post on mansplain.

Local (Bay Area) word of the year: Hellastorm, the name given to the heavy winds and torrential rains that caused flooding and power outages during the “Pineapple Express” storm of December 11 and 12.

In making my WOTY choices, I followed the American Dialect Society's criteria for selection:

Ammosexual. Popularized by late-night host Bill Maher, who used it during his June 6 show to describe a person who has an “unnatural relationship” with his or her  gun.

Bossy. As an adjective meaning “domineering,” it’s been in the lexicon since the 1880s. It made news this year because of Facebook COO Sheryl Sandberg’s “Ban Bossy” campaign, launched in March and aimed at encouraging girls to lead.

Budtender. With two additional states (Alaska and Oregon) and the District of Columbia relaxing restrictions on cannabis, “budtender”—an advisor/concierge for marijuana buyers—is sure to be a job with a secure future. 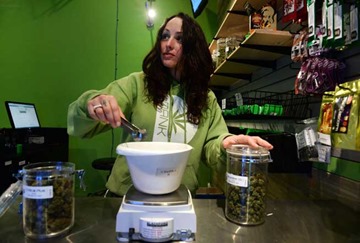 A budtender plies her trade at Dank, a legal marijuana retailer in Denver. Source: The Cannabist.

Delight. “Silicon Valley’s favorite word,” according to an August story in New York magazine. Apple’s new motto is “Simplify, perfect, delight.” Yahoo is intent on “inspiring and delighting customers.” Ditto Squarespace, which wants to “delight our customers.” And October saw the launch of Delighted, “a startup that aims to help businesses collect and analyze customer feedback,” according to TechCrunch.

Ebola. By almost every measure—Google Trends, fear factor, effect on the U.S. midterm elections—the disease dominated the national conversation (despite the fact that only two Americans died from it). By late December, the epidemic was ebbing in West Africa.

EIT (enhanced interrogation technique). Yes, it’s back in the headlines, thanks to the U.S. Senate’s report, released in early December, on the CIA’s Detention and Interrogation Program, aka “the torture report.”

Fappening. See above, “Most Outrageous.”

Gamergate. A controversy that arose in August over misogyny and harassment in video game culture.

Internet of things (IoT). “The interconnection of uniquely identifiable embedded computing devices within the existing Internet infrastructure.” (Wikipedia.) “The next mega-trend.” (Goldman Sachs.) “Increasing the connectedness of people and things on a scale that once was unimaginable.” (Cisco.) “The world’s most massive device market.” (Business Insider.)

Normcore. The anti-fashion fashion trend of the year, aka “grandpa style” and “dowdy.” Just don’t look like you’re trying too hard: Gap laid an egg with its “Dress Normal” campaign. 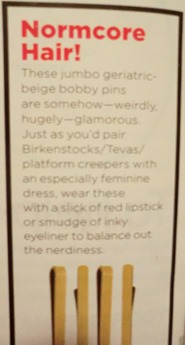 Ping. A signal from the Malaysian Airlines plane that disappeared over the Indian Ocean in early March. The ping sounds were ultimately determined not to have come from the plane’s black box.

Platisher. Coined by Jonathan Glick in a February 7 post about the new platform/publisher hybrids. The word quickly became the object of scorn and loathing: “The worst name in the history of names” (Nieman Journalism Lab). “Borders on the gag inducing” (Gigaom). “A novel portmanteau combining “publisher” and “desperate pandering” (Unsuck It). Unlovely and unloved though it may be, the word lives on.

Polar vortex. The meteorological system responsible for the bitterly cold weather in the U.S. Midwest, South, and East last January. Some predictions call for its return this winter in the British Isles.

Precariat. A blend of precarious and proletariat; used to describe people “whose lives are precarious because they have little or no job security” (Word Spy).

Sugar dating. A strong runner-up for Most Outrageous. Pay-for-play relationships between older, wealthy adults (sugar daddies/mommas) and attractive young women and men (sugar babies). The July 2014 arrest of Alix Tichelman, 26, in the death of a married 51-year-old Google executive, Forrest Timothy Hayes, whom she met through Seeking Arrangement, brought new attention to the site and others like it. Early reports used the term “sugar daddy website,” but in recent months the term has been streamlined to “sugar dating,” possibly influenced by other “___ dating” compounds such as speed dating, online dating, and blind dating.

Tax inversion. “A tax-avoidance maneuver in which an American company is acquired by a smaller foreign competitor, allowing it to move its tax residency abroad while keeping most of its operations in the United States” (Josh Barro, New York Times). Several American companies, including AbbVie, Mylan, Medtronic, Applied Materials, and Chiquita, announced plans in 2014 to enter tax-inversion deals; U.S. Treasury Secretary Jacob Lew urged Congress to halt the trend, “but quick action is unlikely,” the Times reported.

Trigger (warning). Advance notice that a book, movie, or other material has content that could trigger emotional distress or a traumatic reaction. The subject of heated discussion following a May 18 story in the New York Times about college students’ requests to be warned that assigned reading may upset or offend them.

Wearables. Technology designed to be worn on the body. The most prominent example is Google Glass, which debuted in May; the rapidly growing field includes watches, fitness trackers, rings, and a “smart shirt.”

There is also flopping in the National Basketball Association, more formally described as "exaggerating contact." Typical: player brushes up against opponent, and reacts as though he'd run into an electric fence, hoping the officials will call a foul. A flop will earn a warning; subsequent flops incur fines. (Like $5,000 is going to impress these guys: the "average" NBA salary is about $5.5 million a year.)

I'm glad companies have stopped all their hackneyed "innovating" and turned instead to "delighting".