« Words of the Year 2014: Fritinancy Edition | Main | The Airing of Grievances »

Word of the Week: Gefatke

Gefatke: A pancake made of chopped fish and grated potatoes. A portmanteau of gefilte (literally “stuffed”) fish and latke; both words are Yiddish in origin.

“We already have the Cronut, crookie and pretzel croissant,” writes Michele Henry, a staff reporter for the Toronto Star. “Why not the gefatke? Or is it a lafilte?”

Latkes, Henry reminds us, are traditionally eaten at Hanukkah, the eight-day festival of lights that ends this year at sundown December 24. “But, at most other times of the year, we lavish holiday tables with different goodies, including a sort of fish-loaf — shaped into pucks and poached — called gefilte fish. It’s an acquired taste.” (It’s also the perfect substrate for the hottest horseradish you can tolerate.)

Still, this nice Jewish girl thought we’d be remiss, in this age of hybrid foods, not to squash together two of my culture’s most storied dishes, turning gefilte fish and latke into gefatke (or, if you prefer, lafilte).

She enlisted Toronto chef, restaurateur “and member of the tribe” Anthony Rose to realize her vision. Then her Star colleague tweaked it just a bit, adding some Thai fish sauce for a little extra flavor. (Recipe here.)

As a portmanteau, gefatke lacks the recognizability of last year’s Thanksgivukkah. The inclination is to rhyme the stressed second syllable with cat, which suggests an unwelcome (though probably not inaccurate) connection with dietary fat; latke, by contrast, rhymes roughly with plot-keh. (The vowel sound in ke is a schwa.) The alternative, lafilte, is just too Frenchy for this dish. 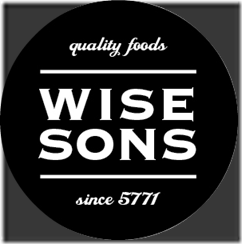 There are no sons named Wise at Wise Sons. The deli takes its name from the “wise son” of the Passover ritual. The Jewish year 5771 translates (approximately, depending on the precise date) to the civil year 2011.

Happy Hanukkah and, as Julia Child would have said in Israel, b’te-avon!

Posted at 07:02 AM in Food and Drink, Holidays, Portmanteaus, Word of the Week, Yiddish | Permalink