Word of the Week: Cromnibus

Cromnibus: The $1.1 trillion spending bill passed by the U.S. House of Representatives on December 11 and by the Senate on December 13. The word is a portmanteau of omnibus bill (per Vox, “how Congress funds the government when things are working normally”—which in recent sessions is never) and the initials of continuing resolution, (“how Congress funds the government when it can’t come to a deal”). The bill now goes to President Obama for his signature. Also spelled CRomnibus.

Omnibus entered English—from a Latin word meaning “for all”—around 1829; it described “a four-wheeled public vehicle with seats for passengers.” By 1832 it had been truncated to bus. In reference to legislation, the Online Etymology Dictionary tells us, omnibus goes back to 1842.

Cromnibus caught on, however briefly, not only because of our enduring affection for portmanteaus but also because the word triggered similar-sounding associations that tickled our collective fancy. One of those associations is cronut, the croissant/donut hybrid invented—and trademarked—in 2013 by New York bakery owner Dominique Ansel. It has inspired dozens of imitators. 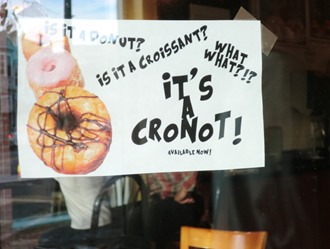 Then there’s cromulent, coined for a 1996 episode of “The Simpsons.” It’s usually defined as “valid” or “acceptable,” or, with a dash of irony, “appearing legitimate but actually spurious.”

The omni- prefix has been used with sardonic intent in another recent-ish coinage, omnishambles, invented by British writer/director Armando Ianucci for a 2009 episode of “The Thick of It.” It was famously used in 2012 in the British House of Commons.

Update: Ben Zimmer alerted me to “the clever meta-blend cromnishambles,” as seen on Twitter last week.

Speaking of -bus words, and of Britain (but not of politics), IncubusLondon is a newish venture whose name is intended to be a portmanteau of [startup] incubator plus bus: it’s a co-working space in a London double-decker bus. Unfortunately, incubus has a separate and sinister meaning: “a male demon who comes upon women in their sleep and rapes them.” You’d think the London gang would have learned from Reebok’s costly misstep, back in 1996, when it named a women’s running shoe the Incubus. According to the Snopes entry, “Reebok Incubus” had been developed in-house and selected from a master list of about 1,500 names. Whoops:

Much chagrined, the company recalled 18,000 boxes of these unsold $57.99 shoes. The poorly researched name did not appear on the footwear itself but merely on its boxes, which provides a potential explanation for how the product’s rollout process got so far along before anyone commented on the unseemly name.

More of an excuse than an explanation, if you ask me.

Posted at 08:15 AM in Bad Names, Government, Neologisms, Portmanteaus, Shoes, Word of the Week | Permalink