« Word of the Week: Endling | Main | Naming Advice from a Cartoonist »

The American Name Society is accepting nominations for Names of the Year, with the winners to be announced at the society’s annual meeting in Portland, Oregon, on January 9, 2015. Anyone can play; submit your nominations no later than January 7.

Here are my own nominations in the categories established by ANS.

Michael Brown. The unarmed 18-year-old black resident of Ferguson, Missouri, was fatally shot in August by a white Ferguson police offer, Darren Wilson. The shooting, and the grand jury’s decision in late November not to indict Wilson, set off protests in Ferguson and throughout the United States.

Mo’ne Davis. On August 15, the 13-year-old from Philadelphia was one of two girls who played in the 2014 Little League World Series and the first to pitch a shutout. The accomplishment earned Sports Illustrated’s “Sports Kid of the Year” (SKOTY) award. By the way, Mo’ne’s middle name is Ikea.

Josh Earnest. The current White House press secretary, announced by President Obama in May 2014, has a perfectly self-canceling name. Is he joshing or is he earnest?

Ferguson. Following the August 9 shooting of Michael Brown, the St. Louis suburb, population about 21,000, became a byword for racial tension and police violence. My nomination for overall Name of the Year.

Hobby Lobby. Earlier this year, the U.S. Supreme Court ruled that the craft-supply chain did not have to pay for insurance coverage for female contraception under the Affordable Care Act. Read my Visual Thesaurus column about Hobby Lobby and other names.

ISIS/ISIL/Islamic State. Not exactly a “trade” name, but the various versions of the name of the Islamic extremist group—responsible for several high-profiled beheadings—fit no other ANS category. The first acronym stands for Islamic State in Syria, the second for Islamic State in the Levant. Journalists and government officials showed fluctuating usage preferences. At least one actual trade name was changed because of the group’s violent acts: the mobile-payment app formerly known as ISIS became Softcard in September.

MH370. The code name of Malaysia Airlines flight 370, which disappeared on March 8 while flying from Kuala Lumpur to Beijing. The subsequent search effort—the largest and most expensive in history—failed to find the crash site, flight debris, or bodies.

Uber. The app-powered ride-sharing service, founded in San Francisco in 2009, came under the spotlight in 2014 for privacy violations, legal challenges, sexism and misogyny, and spying on journalists. Despite, or perhaps because, of the controversies, “Uber” became a byword for “disruptive business model”; various startups have been called “Uber for X,” in which X may equal snow plows, kids, marijuana, pizza, “gentleman companions,” laundry, and more.

Elsa. One of the two sisters in the Disney animated feature Frozen. The movie was released in late November 2013, but Elsa-mania took off in 2014, inspiring dolls, costumes, swimsuits, mouthwash, and a discussion on Quora. Elsa, voiced by Idina Menzel, sings the Oscar-winning and ubiquitous song “Let It Go.” 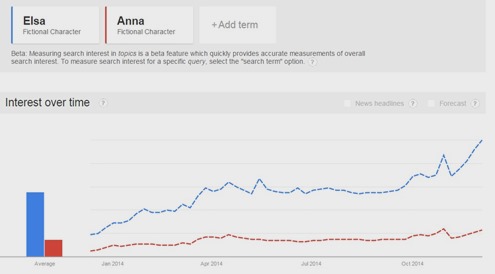 The Wall Street Journal covered the phenomenon in November 2014, noting that “Anna was supposed to be the star. She has the most lines, songs and love interests … and ultimately saves the day”:

“Elsa is double what Anna is,” says Lesa Nelson, senior vice president for children’s merchandise at J.C. Penney Co., of the dolls and other “Frozen” merchandise depicting the sisters. “You sell two Elsas for every Anna.” …

Parents are puzzled by Elsa’s outsize influence. “Elsa doesn’t really do anything but sing this great song and, let’s be honest, she’s kind of a jerk,” says Jill Walsh, of Newton, Mass., whose 4-year-old daughter, Maeve, often dresses up as Elsa. “A lot of moms try to push for Anna- she’s the go-getter of the two.”

Posted at 09:00 AM in Acronyms, Current Affairs, Name of the Year | Permalink