From A-bomb to to zoom: the Weed Blog’s extensive—indeed, staggering—lexicon of slang terms for marijuana. (I discussed one of those terms, 420, in a post published earlier this week.)

Speaking of specialized lexicons, check out The D.C. Manual of Style and Usage, Washington City Paper’s entertainingly written and copiously illustrated guide. One of my favorite entries: “Blelvis: A portmanteau of ‘black’ and ‘Elvis.’ Refers exclusively to D.C.’s mostly elusive, semifamous busker; he likely never uses the words ‘portmanteau’ and ‘busker,’ but he can sing every song in the Elvis Presley catalog.” Also: “Hipster. A term that is somehow both loaded and meaningless. If you feel compelled to use it, talk to an editor.”

The new first-person-shooter game Destiny, released in September, features a huge arsenal of weapons, and I can only imagine the brainstorming sessions that produced names like Praedyth’s Revenge, Pocket Infinity, Strange Suspect, and the excellent Doctor Nope. The Australian game-review site Kotaku provides a ranking of all 74 names. (Via Our Bold Hero.) IGN lists the weapons by category (pulse rifles, fusion rifles, rocket launchers, etc.).

An “ally” is what British soldiers in Afghanistan call “a battlefield fashionista--desirables include having a beard, using a different rifle, carrying vast amounts of ammunition, being dusty and having obscene amounts of tattoos and hair.” A “crow” is a new soldier recently out of training. From a guide to Afghanistan battlefield slang published by BBC News. (Via Language Hat.)

You had me at “you had me at”: Ben Yagoda on the post-Jerry Maguire life of a meme. If you’re curious about the origins of Toyota model names, this CarScoops explainer is a reasonable starting point. The Camry got its name from Japanese kanmuri, meaning “crown”; the Supra is a direct borrowing from Latin (“above”). But this story about the Yaris made me wonder: “Yaris is an amalgamation of words from Greek mythology and German. In Greek mythology, ‘Charis’ was a symbol of beauty and elegance. Toyota swapped the ‘Ch’  with ‘Ya’ – German for ‘yes’ – to symbolise the perceived reaction of European markets to the car’s styling.”

The predictably zany stories of how some British ad agencies—Doofer, tenthree, A Large Evil Corporation, and others got their names.

Tom Magliozzi, co-host of NPR’s long-running “Car Talk,” died November 3 at 77. In his honor, here’s a link to one of my favorite features of the show: the punny staff credits, from sculling coach Rose Dior to assistant disciplinarian Joaquin D’Planque. (Via Henry Fuhrmann.)

Cherpumple? So 2010. A Houston bakery’s pumpecapple piecake (pumpkin + pecan + apple) is this year’s turducken of desserts. (Via Barry Popik.) 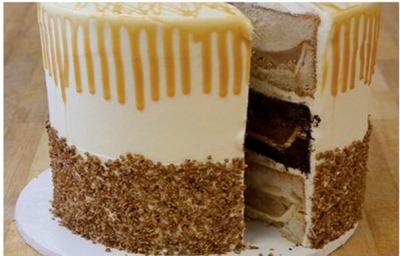 Five contemporary authors tell how they titled their books. (My own semi-facetious take on book titling here.)

And speaking of novels: “Can’t get a deal for that novel manuscript? Try ad agencies. Young & Rubicam commissioned Booker award-nominated novelist William Boyd to tell any story he wanted as long as it featured a Land Rover vehicle.” By Ad Broad, who calls herself “the oldest working writer in advertising.”

From veteran name developer David Placek, founder of Lexicon Branding, some tips to help startups avoid making naming mistakes. First piece of advice: The name “doesn’t have to be clever. It just has to communicate.” And, adds Placek, stop it already with the -ly names. Yep.

If you would like to know more about how the Yaris got its name, you could ask @NOMEN_naming - I believe that German naming agency Nomen came up with the name: Here is a link to part of their portfolio. And while German Ja has a different spelling, the pronunciation is close enough.

(Full disclosure: I used to do some free-lancing for them eons ago.)

I wonder why the writers on the city paper assume "Blelvis" likely never uses those two words. That idea seems a bit presumptuous.