« On the Visual Thesaurus: British Borrowings | Main | Word of the Week: Pre-cation »

In Fort Collins, Colorado, a Mexican restaurant chain called Illegal Pete’s is being targeted by immigrant-rights groups that say the name is derogatory and offensive because of “the i word,” as in “illegal immigrant.” The chain’s owner, Pete Turner, opened the first Illegal Pete’s in 1995; he told the New York Times the name “was inspired by the name of a bar in a novel and by his late father, also named Pete, who had a rebellious streak.” “I never intended it to be about undocumented immigrants,” Turner told the Times. “Never. Not once.” Turner, who calls himself a pro-immigrant liberal, says he gave serious consideration to a name change. But in early November he announced, in a long letter on the company website, that he’d decided against it. Readers’ comments have been almost unanimously supportive.

This week Toyota announced that it would start selling a hydrogen fuel cell sedan in 2015 (sticker price: $57,500). The futuristic car has a name to match: Mirai, which means “future” in Japanese.

The name sounds good to non-Japanese ears, too. Mira means “look” in Spanish, “aim” or “objective” in Italian, and “watch intensely” in French. In Sanskrit it means “ocean,” a fitting association with hydrogen. And in the Slavic languages mir means peace.

[O]ur English word “future” is firmly rooted in an Indo-European belief that it will come to pass / be / exist. The Sinitic term, in contrast, is more skeptical, and indicates an uncertainty about the very possibility of that which has not yet arrived. It seems to me that, if we accept the philosophical implications of the term, mirai / wèilái will keep receding and never quite arrive. 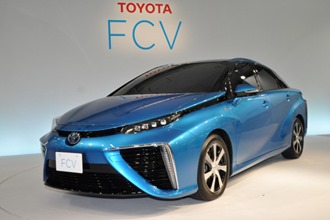 Print magazines, once dismissed as dead-tree relics, are proving to be pretty hardy after all. California Sunday, an independent monthly (for now) that’s distributed with the state’s biggest newspapers, made a splashy debut October 5. Now Airbnb, the lodging-rental company that’s out to disrupt the hospitality industry, has launched Pineapple, a quarterly publication for hosts (who may choose to share it with their paying guests). According to a New York Times article, the 128-page winter 2014 issue carries no advertising and contains features on San Francisco (where Airbnb is headquartered), London, and Seoul.

Why Pineapple? For centuries—since Columbus’s second voyage, according to some accounts—the fruit has symbolized hospitality and luxury. Pineapple names and images are common in the hospitality industry, and pineapple tchotchkes abound. 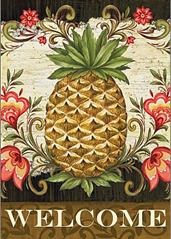 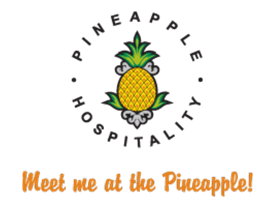 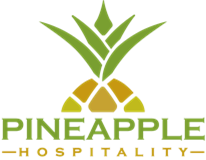 A different Pineapple Hospitality: distributors of “green” amenities for hotels.

“It Couldn’t Please Me More” (The Pineapple Song) from the stage version of Cabaret (cut, sadly, from the movie). So rare! So costly! So luxurious! I searched in vain for a clip from the original Broadway show, in which the immortal Lotte Lenya played Fraulein Schneider.

Mirai also makes me think of the French given name Mireille (which may be etymologically related to the verb mirer that you mentioned). Illegal Pete's, on the other hand, sounds like a raffish distant cousin of Legal Sea Foods.

"Pineapple" would be problematic here in Australia. There is a colloquial expression "to get the rough end of the pineapple" meaning to get a raw deal. You have to specify which end you're talking about...