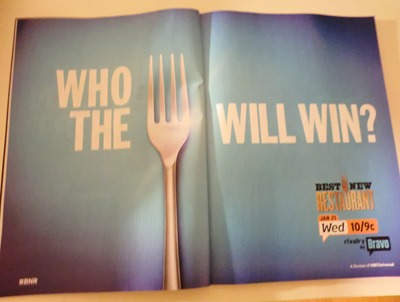 “Who the [fork] will win?” Ad for the Bravo TV series “Best New Restaurant,” premiering January 21. (Thanks to Karen Wise for the tip.) 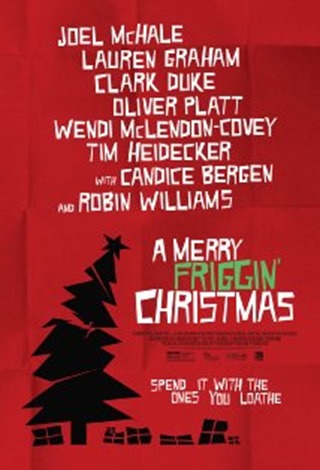 A Merry Friggin’ Christmas, in theaters and on demand today. Rated PG-13 (“for language and crude humor throughout”), it’s one of the last movies completed by Robin Williams, who committed suicide in August. As Jesse Sheidlower documents in The F Word, “frigging” (noun and modifier) has been a coarse synonym for “fucking” for centuries; James Joyce famously employed it in Ulysses (“that frigging drawing”).

In addition to the vulgarism in the title, the movie is notable for its poster design, which is either a homage to or a ripoff of the great designer Saul Bass, who created titles and posters for Vertigo, Spartacus, Anatomy of a Murder, and many other movies. As noted in a recent Reddit thread, the Merry Friggin’ Christmas poster also bears a startling resemblance to the poster for the 2008 Coen Brothers film Burn After Reading. (A Merry Friggin’ Christmas was directed by the memorably named Tristram Shapeero.)

For the Strategy magazine Agency of the Year competition, Canadian marketing agency Cossette promoted itself with a video that asked a single question: “What the fuck is going on at Cossette?”

NSFW unless you use headphones.

Cossette (named for founder Claude Cossette) did not win.

Finally, a greeting card that clearly doesn’t come from Hallmark. 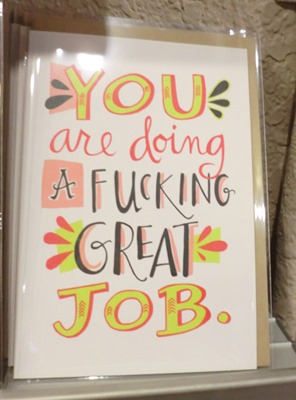 “You Are Doing a Fucking Great Job,” Seen at eye level at Nathan & Co., a gift shop on Piedmont Avenue in Oakland; created by Emily McDowell, who also offers a “ready-to-frame art print” with the identical sentiment.

More in this vein:

“F Is for Friday”

Good for you! I always thought the "Meet the Fockers" was a riff on the F-word. Personally, I like the Irish variation: "fecking."

Monica: Abso-fockin-lutely correct about The Fockers. And see my 2011 post about Feckin Irish whiskey and Effen vodka.