My friend Suzanne Mantell is a rare-book dealer, and every so often I’m the beneficiary of one of her finds. The latest is a real gem hiding behind a pedestrian title: Dictionary of Trade Name Origins, by the late British onomastician (scholar of names) and toponymist (place-name expert) Adrian Room. The book, now out of print, was originally published in the UK in 1982; my copy is the revised 1983 edition. 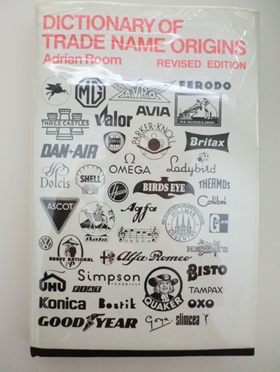 Look at those gorgeous logos!

I’d never heard of Adrian Room (1933–2011), but I certainly should have. He turns out to have been astonishingly prolific: his many published books include Placenames of the World, The Street Names of England, The Fascinating Origins of Everyday Words, and Cassell’s Dictionary of First Names. He also edited a later edition of Brewer’s Dictionary of Phrase and Fable than the one I own.

To compile the Dictionary of Trade Name Origins, Room did a lot of dogged and, to hear him tell it, frustrating research. “[A]n unusually high proportion of written enquiries, even repeated ones, failed to reach their addressee … [or] many companies either could not or would not supply the information I asked for.” Nevertheless, the results are admirably comprehensive, if (understandably) biased toward British and Continental names. The excellent introduction gives a conceptual framework for brand names (“an important function … is to suggest as well as to indicate”) and lays out “the chief criteria for a good, successful name”: instantly comprehensible visually, easily pronounceable in all major languages, lacking “ludicrous or undesirable” meanings in foreign languages, and so on—all still relevant today. An appendix covers the role of specific letters and suffixes in name creation, a topic of special interest to me. (See my many posts on -ly names, a subject I’ll be covering in a presentation with Christopher Johnson at the American Name Society meeting in Portland in January.)

The bulk of the book is an alphabetical dictionary of brand-name origins, from Abbey National (created by the merger of the Abbey Road and National building societies) to Zubes (a brand of throat lozenges, whose origin “can only be guessed at,” although Room wonders whether zoob, the Russian word for tooth, played a role).

In between are some edifying and amusing stories. Here are some of my favorites:

- Nylon, the fabric name, has never been a trademark and has no meaning. “The letters of the name are stated to have no significance, etymologically or otherwise, yet there must even so be a link with rayon, which predated it.” The name was coined in 1938 by the Du Pont company.

- Virgin – in 1983 not yet a global conglomerate but merely a record company – was almost named Slipped Disc. (That name was “wisely rejected,” Room editorializes.)

- Scotch, the adhesive-tape brand sold by 3M, has no connection to Scotland or Scottish people (or terriers, for that matter). Rather, the name mostly likely came from the derogatory usage of “Scotch” to mean “frugal.” As Room tells the story, in the 1920s 3M developed a masking tape for use by car manufacturers who were painting two-tone cars. To keep costs down, the tape was only partially adhesive, and it tended to fall off. “At one garage, when the 3M salesman called, he was told to ‘take this Scotch tape back to those bosses of yours and tell them to put adhesive all over it—not just on the edges’.” 3M complied, but the “Scotch tape” name stuck, so to speak, launching “a trade name so well known that it has almost come to be generic.”

- Sobranie, the British tobacco brand, means “parliament” in Bulgarian. The association of tobacco with “exotic” cultures is a venerable one (see also Camel cigarettes).

- Names ending in -ola were in vogue in the late 19th and early 20th centuries. Pianola, Victrola, and Farola are the ones Room cites; you could add Crayola, Moviola, and Shinola to the list. According to Room, the suffix conferred a “quasi-Italian” flavor to the brands.

- Audi, the car brand, is the Latin translation of the surname of the company’s German founder, Dr. August Horch. Both words mean “hear!” “This, although certainly a classical name, is more punning than prestigious,” writes Room.

Speaking of car names, here’s the entry about the Russian Lada, made by the Volga Automotive Works.

The Russian car is manufactured in Tolyatti (formerly Stavropol) on the river Volga. The river is reflected in the logo of the vehicle, which depicts a boat. The name, however, does not derive from the Russian poetic word ladya, “boat,” but from a folk word meaning “beloved” or “dear one.” In the USSR the car’s native name is Zhiguli, derived from the hills so called bordering the Volga not far from the city of manufacture. The car is known as Lada abroad since it is a simpler name in most languages and also since in some languages “Zhiguli” has undesirable connotations. In English and French, for example, it resembles “gigolo,” and in Arabic can suggest similar sounding words with meanings such as “fake” and “ignoramus.” In Scandinavian countries, moreover, the sound “zh” (as in English “pleasure”) does not exist. The name is also the standard Russian diminutive of Vladimir, which doubtless helps the car’s popular image.

This story, and not the spurious one about the Chevrolet Nova, should be the one that illustrates the linguistic perils of transnational marketing.

Check out other books sold by Suzanne Mantell in the categories language and language arts and disciplines. (I’m not clear on the distinction, but both categories are worth a look.)

Posted at 06:50 AM in Books, Cars and Motorcycles, History, Latin, Naming, Trademark | Permalink

"Tolyatti" is a transliteration of a Russian transliteration of "Togliatti." Palmiro Togliatti was for many years the much-loved leader of the Italian Communist Party; as I recall, the Zhiguli plant was built in conjunction with Fiat Motors, and the workers at the Fiat factory in Turin were staunch PCI supporters, so the name is kind of an obvious choice.

Thank you for sharing this!