Word of the Week: Quarantine

Quarantine: A period of enforced isolation or restriction of movement to prevent the spread of infectious disease. From Italian quarantina, a 40-day period.

“Quarantine” has spiked recently because of news coverage of the Ebola virus, which originated in West Africa—the virus was named for for what researchers believed to be the Ebola River in what is now the Democratic Republic of the Congo—and has spread to other areas, including the United States. 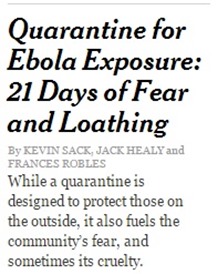 From the Times story:

So it has been in Quarantine Nation. As the Ebola scare spreads from Texas to Ohio and beyond, the number of people who have locked themselves away — some under government orders, others voluntarily — has grown well beyond those who lived with and cared for Mr. Duncan before his death on Oct. 8. The discovery last week that two nurses at Texas Health Presbyterian Hospital here had caught the virus while treating Mr. Duncan extended concentric circles of fear to new sets of hospital workers and other contacts.

The medical-isolation sense of “quarantine” is only one of the word’s historical meanings. John Kelly, who blogs about etymology at Mashed Radish, wrote earlier this month about “quarantine”:

The third sense of quarantine, from which we get today’s sense of medical isolation, was “first imposed in 1377 at Ragusa (now Dubrovnik), on ships from Egypt and the East,” Shipley comments in his Discursive Dictionary. Other sources cite quarantine as first appearing in Venice. This quarantine indeed passes, though, from the Italian quarantina giorni, “period of forty days,” with quarantina from quaranta, “forty,” also showing significant reduction of quadraginta’s consonants.

Before it became associated with disease, “quarantine” referred to the Biblical desert where Jesus is said to have fasted for 40 days and to the 40-day Lenten period, whose length was inspired by the Bible narrative. (For more on the mystical meanings of 40, read the rest of John Kelly’s post.)

“Quarantine” also has an obsolete legal sense, summarized by the OED as “[a] period of forty days during which a widow who is entitled to a dower is supposed to be assigned her dower and has the right to remain in her deceased husband's chief dwelling.”

And “quarantine” is used in computing: “The isolation of a computer, a piece of software, a part of a network, etc., in order to keep malignant software or unwanted data separate from the rest of a system” (OED again).

For reasons I can’t explain, the people who loudly lament the use of “decimate” to mean anything other than the Roman military sense of “to kill one in ten” are silent on the seemingly paradoxical matter of a 21-day quarantine.

Despite considerable media-generated Ebola hysteria, the current spike in “quarantine” usage is dwarfed by a giant peak in 2008. I suspect that this cultural event prompted the earlier surge: 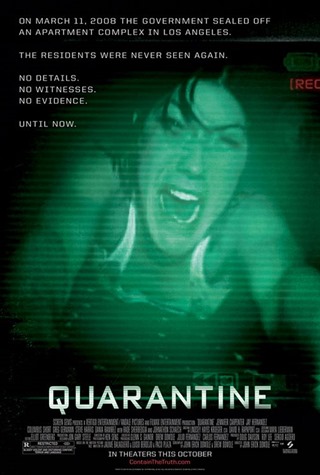 UPDATE: Ben Zimmer wrote about “quarantine” for the Wall Street Journal, noting that the term was used “in the run-up to World War II when Franklin D. Roosevelt sought to punish the Axis powers, and then again by John F. Kennedy during the 1962 Cuban Missile Crisis.”

Posted at 06:19 AM in Current Affairs, Etymology, Medicine, Numbers, Word of the Week | Permalink