Word of the Week: Estivate

Estivate doesn’t often find its way into everyday parlance, but I came across it in Ben Brantley’s review in the New York Times of The Country House, a new play by Donald Margulies starring Blythe Danner (aka Gwyneth Paltrow’s mother):

The setting in this case is Williamstown, Mass., home to a venerable and usually star-studded summer theater festival. Anna (like Ms. Danner, as it happens) has estivated in Williamstown for many a decade.

Coincidentally, I had also just read (that very same day, in fact) a TechCrunch report about a new business called Estify. A company capable of spreading summer throughout the year sounds like a delightful thing, but that is not Estify’s mission. 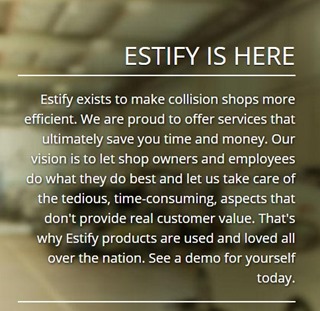 Estify does a rambling and inept job of telling its story, but the TechCrunch story makes it clear that “Estify” comes from “estimate”:

There’s a rift between insurance companies and repair shops, explains Jordan Furniss, one of Estify’s co-founders. “[Insurers] write up a preliminary estimate for what a repair should cost and then repair shops have to duplicate that estimate into their systems.”

That means Estify joins the growing list of -ify names created from verbs: Chargify, Predictify, Chirpify, Connectify, et al.). As my colleague The Name Inspector (Christopher Johnson) has pointed out:

You don’t find -ify attached to verbs in natural English, because the point of the -ify ending is to make a verb out of a different kind of word. The only exception The Name Inspector has thought of is preachify, and he’s willing to wager that’s a tongue-in-cheek word, based on the similar word speechify, that’s meant to illustrate the kind artificially puffed-up speaking style it refers to.

And while we’re on the subject, The Name Inspector and I will be co-presenting a paper on naming trends at the American Name Society’s annual meeting in Portland, Oregon, in January. I’ll focus on names that end in -ly and Chris will tackle the -ifys. (I’ll also be giving a solo presentation on the nomenclature of legal cannabis, a topic I’ve touched on in this blog.) The ANS meeting is held concurrently with meetings of the American Linguistic Association and the American Dialect Society; an annual highlight is the word-of-the-year vote, which is open to the public. If you live in Portland or plan to be there between January 8 and 11, I’d love to meet up!