On the Visual Thesaurus: Ish

Full access to the column is restricted to subscribers (only $19.95 a year!). Here’s a shortish excerpt:

Bookish: This word has meant “literary” or “enthusiastic about reading” since the mid-16th century. When attached to a noun, ish gives the sense of belonging to that thing or person, or having its nature or character. Many noun + ish blends express disparagement: consider childish, sluggish, shrewish, foolish, selfish, and many others. Other times, as with bookish (or feverish or freakish), the sense is neutral. In addition to the Berkeley bookstore, there’s an ebook reader called Booki.sh, which uses the Saint Helena country-code domain extension .sh.

And here’s the Halloween version. 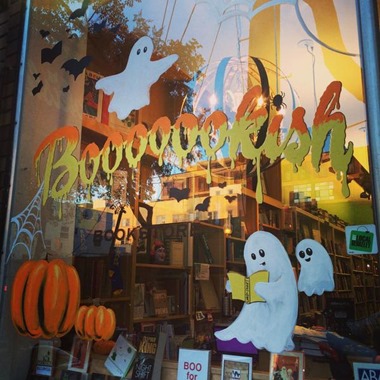 I figured someone would ask about Ish Kabibble, so even though he’s unrelated to the topic at hand I did some research.

Ish Kabibble was the stage name of Merwyn Bogue (1907-1994 or 1908-1993, depending on the source), a cornet player in Kay Kyser’s big band. The origin of the pseudonym is debated. Here’s an excerpt from the World Wide Words entry:

This dismissive slang expression came into existence in the USA quite suddenly around 1913 with the ostensible meaning “I should worry!”, which means, of course, “Don’t worry!” or “Who cares?”. It had quite a vogue for a decade or two and was the name of a character played by Merwyn Bogue on a 1930s radio show called Kay Kyser’s Kollege of Musical Knowledge (they don’t make titles like that any more).

Those of us who sift the detritus of language for fun and profit are intrigued by it. It looks and sounds Yiddish and the phrases nish gefidlt, nicht gefiedelt, and ich gebliebte have all been suggested as sources. The idea of a Jewish connection was reinforced in 1914 when Harry Hershfield began his cartoon strip Abie the Agent in Hearst newspapers, which featured the car salesman Abraham (“Abie”) Kabibble.

Many people at the time certainly thought it was Yiddish, and it’s notable that some Anglicised it to “I should bibble” or “we should bibble”. But it was equally firmly said by contemporaries that no Yiddish connection existed at all.