« Word of the Week: Churnalism | Main | The Searchability Myth »

Name in the News: Hydrox

Dumped by parent company Kellogg in 2002 and briefly revived in 2008, the Hydrox cookie will make a comeback this fall. Cue the “Hydrox Redux” headlines!

The dead Hydrox trademark was acquired in 2013 byLeaf Brands, a candy company in Newport Coast (Orange County), California, that is also reviving several other “ghost brands,” including Tart n Tinys, Wacky Wafers, Quicksand bubble gum, and Astro Pops. Leaf Brands has an interesting history of its own, about which more in a bit.

Hydrox is the original American sandwich cookie—it was introduced in 1908, four years before that upstart knockoff Oreo—and it had maintained a small but loyal following throughout the brand’s ups and downs. (See this fan page, for instance.) Its original manufacturer was Sunshine (later Sunshine Biscuits), which was sold to Keebler in 1996. Keebler reformulated the product and reintroduced it under the “Droxies” name.* Kellogg’s bought Keebler in 2001 and lost no time in sending the Droxies and Hydrox brands to their crumbly death. 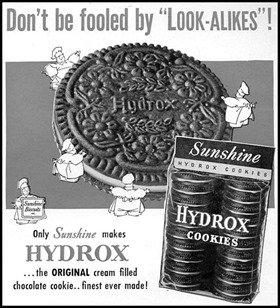 “Don’t be fooled by ‘look-alikes’!” Hydrox ad valiantly targets Oreo in a 1954 issue of Woman’s Day.

According to a Wall Street Journal article about the 2008 revival, “The Hydrox name came from combining the words hydrogen and oxygen, which Sunshine executives thought evoked purity. Others thought it sounded more like a laundry detergent.” 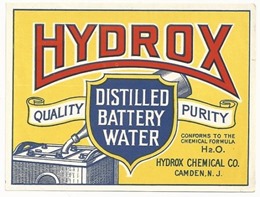 There’s still a going concern in Elgin, Illinois, called Hydrox Laboratories, which has been making hydrogen peroxide and other medical and beauty products since 1913.

And there’s Alpha Hydrox, a brand of anti-wrinkle skin lotions. 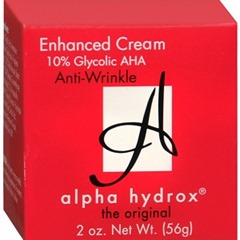 Made by Neoteric Cosmetics, “a proud American manufacturer.”

Whereas “Hydrox” sounds like a chemistry experiment, or a Greek water monster, or rocks, “Oreo” is, hands down, one of the most successful coined names in history.

Oreo cookies were created in 1912 by Nabisco (then called National Biscuit Company), which still produces them. According to a 2013 Buzzfeed article, Oreo went through several name changes:

The origin of the Oreo name is officially a mystery. Buzzfeed claims the “or” came from the French word for gold: the original packaging was a gold-colored tin. 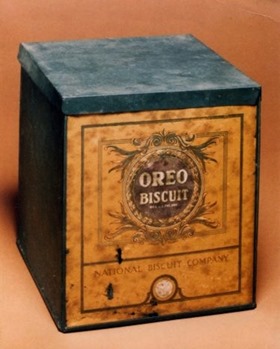 In his book about brand-name origins, From Altoids to Zima, Evan Morris writes that oreo is Greek for “mountain” and that the name was chosen because early versions of the cookie were dome-shaped. (I have found no evidence to support this theory.) “Or maybe Oreo was just easy to say and remember,” Morris ventures. That’s more like it. Consider, too, those symmetric O’s, so reminiscent of the twin cookie disks that bracket the creamy center. (You can’t spell creamy without re.) 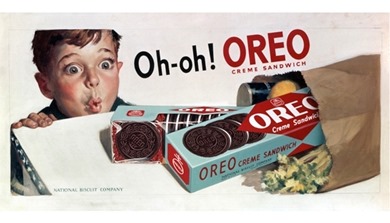 “Oh-oh! Oreo”—round eyes, round mouth, round letters, round cookie. The brand’s first slogan, created in 1950. Ad via Buzzfeed.

“Oreo conveys round and is fun to say and hear,” Steven Addis of branding consultancy Addis told USA Today. “Hydrox sounds scientific and medicinal ... not appetizing at all.”

Some people found it appetizing enough. One reason Hydrox survived as long as it did was its kosher status. For decades, Oreo’s filling was made with lard, which observant Jews won’t eat, while the Hydrox crème filling was made with vegetable oil. To Jews who kept kosher, “Hydrox” may have suggested not merely medicinal but clean. Oreo switched to a kosher filling in 1998, thus removing the last barrier to total cookie domination.

But not quite. My family didn’t keep kosher, but we always bought and ate Hydrox cookies anyway, probably because they were cheaper than the competition. That early conditioning took: When I first tasted an Oreo, I didn’t like it—not crisp enough on the outside, too gooey on the inside, too sweet throughout.

It remains to be seen what Leaf Brands will do with its new acquisition. Leaf, by the way, is the surname of the company’s founders; according to a press release, the company was founded in the 1920s and was once the fourth-largest candy company in the U.S. It’s the parent company of familiar candy brands like Whoppers and Jolly Ranchers, and it recently released a new product called Farts Candy, which won the Most Innovative Product award at the 2014 Sweets & Success Expo. Here is the official description of Farts: “Flavorful chewy candy nuggets in all kinds of fruity flavors that are so fun and yummy, they’re funny! So fun, they’ll make you laugh!” 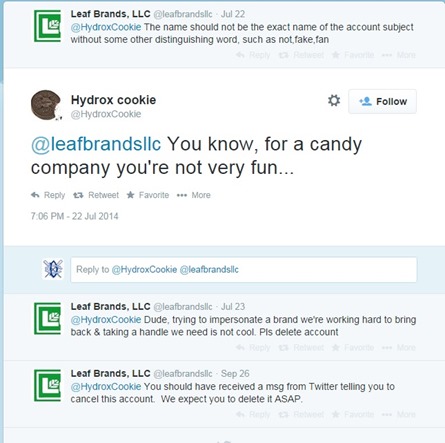 * One of my very first naming assignments was for a Keebler product that was not Droxies. “Droxies” always sounded to me like an unsavory combination of “doxy” and “druggies.”

Posted at 06:28 AM in Food and Drink, How They Got That Name, Names in the News, Naming, Trademark | Permalink

Oh, man, I grew up eating these as well, and indeed, Oreos were... different and far sweeter.
I had no idea they were so old -- explains the name. And, what a difficult name - there's just nothing edible sounding about Hydrox... and yes, a "doxy" cookie is far worse! Why are they trying so hard to keep such a difficult name?

> Kellogg’s bought Keebler in 2001 and lost no time in sending the Droxies and Hydrox brands to their crumbly death.

Nancy Davis Kho: I knew I could count on you for jingle support.

In Modern Greek, ωραίο (ωραίον in Classical Greek) means "good-looking, beautiful" - it's the neuter form of the adjective ωραίος - ωραία - ωραίο. In Classical Greek (and also as a relic in Modern Greek) the word for mountain is όρος. It's quite easy to see where the confusion arose from.

As an aside, in Greece we've had this kind of sandwich biscuits since the 1960s, which is as far back as I can remember, and obviously long before that. All local biscuit companies made them. The filling was mostly chocolate-flavoured, and very occasionally with other fruit-like flavours such as banana. The biscuits were usually brown-coloured (or light-chocolatey, if you prefer). About twenty years ago, your Oreos invaded our market. I don't know if they are locally made or imported from another EU country, because frankly I don't care very much for their taste, and the dark (almost black) biscuit is a bit off-putting for my taste.

Thank you very much for your blog, which I've been enjoying for the past couple of years.