« Word of the Week: Quarantine | Main | Excited for You to Take »

Then there’s this one: 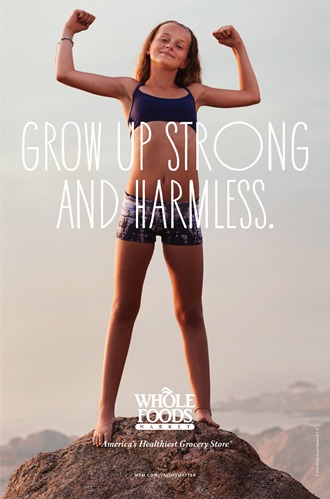 “Grow Up Strong and Harmless.” But not armless, obviously.

I … don’t get this. I mean, “Grow Up Strong”—sure, fine, OK. But how does one “Grow Up Harmless”? What could that possibly mean?

“Harmless” has several dictionary definitions: inoffensive (“He seems harmless enough”) and benign (“harmless bacteria”) are the most familiar. There’s also a legal definition, the one we see in the boilerplate language “to hold harmless”: “free from loss or legal liability.”

But the WF ad doesn’t appear to use “harmless” in any of those senses. Instead—as far as I can tell—it’s meant to be a synonym for “kind” or “ethical.” Or possibly “Without Causing Harm to Anything on the Planet.” That’s quite a semantic leap, and, frankly, senseless.

Then again, I may just be too square for the rarefied sensibilities of Partners & Spade, which has built its reputation on too-cool-for-school chic. The agency’s inverted name is one tipoff; its strenuously self-effacing tagline—“A Well-Intentioned Endeavor”—is another. The P&S client list is a hipster honor roll: Warby Parker, Shinola, Harry’s shaving products. The Spade on the nameplate is Andy Spade, husband of Kate and co-founder of the fashion label Kate Spade and the grownup jammies label Sleepy Jones. I’d tweet a query about “harmless,” to P&S, but the account’s been moribund for more than a year. Too cool for Twitter, even!

The “harmless” Whole Foods ad triggered my recollection of another grocery-store “harmless.” 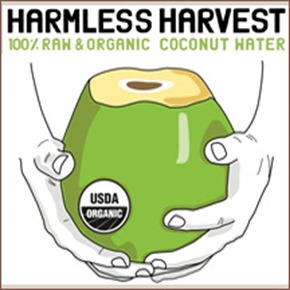 The first time I encountered this name I thought it sounded weirdly apologetic: damning with the faintest of praise. But at least it has alliteration on its side; Whole Foods’ “harmless” just sounds confused.

I did find one use of “harmless” that’s not merely well intentioned but also well targeted: Harmless.org, a UK organization that helps “people who self harm, their friends and families and professionals.” At last—someone who knows how to keep “harmless” out of harm’s way.

Posted at 07:30 AM in Advertising, Food and Drink, Naming, They Said WHAT???, Words | Permalink

Oh, that's dreadful... especially because it's a girl. Perhaps it would be emasculating if the word "harmless" were used with a boy, but to use it with a girl... "Here, sweetie, grow up and don't really do anything that rocks the boat. Stay naive!"

Tanita and Susan: I don't see this as a boys vs. girls question. I see it as a misunderstanding of what "harmless" means. No amount of rationalization can make it a synonym for "caring" or "ethical," the way the agency seems to have intended.

Well, as a "layperson" who is not a word-smith or corporate brander but probably someone for whom that ad is geared, my first impression is that girls are, or should be, harmless. It's a breathtakingly misguided (and stupid) ad.

Am I the only person who sees this ad as ok inappropriately sexual for a young girl?! She is basically wearing a right pair of underwear! Are we trying to appeal to pedophiles or something? I just don't understand the point of this ad whatsoever. What is the message supposed to be here?

Donna: The girl is wearing shorts and a running top or swim top -- she looks to me to be a healthy, happy young athlete. I suppose it's possible to to read a sexual message into the image, but it's not how I saw it.

"Harmless," to me, is the inappropriate (or just off) message here.

It has nothing to do with Douglas Adams?
Surely the Earth being "Mostly Harmless" is almost as well known as 42 being the Answer, by now?

Wow, it's like you and other commenters are willfully trying to misunderstand. I love this ad. This girl is not being portrayed as sexual just because you see skin in an obviously non sexual pose. Nor is it saying don't rock the boat....she is flexing muscles and standing proud, obviously not a wimp. This is saying be strong, but don't use your strength for harming others...for exploiting the weak...in this context, for harming the environment or the creatures in it. I am a vegan and I saw this as directed at me. I strive to be strong in body and spirit, but I do so in ways that don't exploit animals.