“Excited for You to Take”

Last week the mail brought a sample of Dove Deep Moisture Nourishing Body Wash with NutriumMoisture [sic]. Yes, I puzzled briefly over “Nutrium” (the singular form of nutria?) and the “moisture” redundancy,* but that’s not what I want to talk about today. 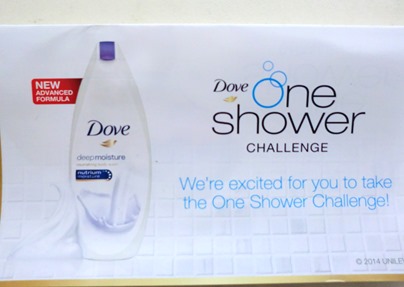 “We’re excited for you to take the One Shower Challenge!”

“Excited for you to take” is one of the newish “excited for __” constructions that I’ve been noticing in speech and writing. The Dove copy was my first encounter with the phrase in a commercial context, but it turns out to be more common than I’d thought. (See below.) Indeed, it represents a convergence of two hot lingua-trends: preposition creep—a term I’m borrowing from English professor and language writer Ben Yagoda—and, more generally, excitement overload.

Back in August 2013, Ben Yagoda queried his Twitter followers about “excited for [noun].” In May 2014 he summed up his findings in the Chronicle of Higher Education’s Lingua Franca blog, also taking on “enamored with” (in place of the standard “enamored of,” and possibly influenced by “in love with”), “obsessed with” (which now trumps “obsessed by”), and “bored of” (a newcomer that’s overtaking “bored by” or “bored with,” at least among younger speakers and writers, perhaps under the influence of “tired of.”)

That leads me to an even newer case of preposition creep, excited for. There are a lot of wrinkles in this one. The word excite was for centuries used to mean stimulate, in an electromagnetic, biological, emotional, or sexual sense. Excited took on its current connotation of having strongly positive anticipatory feelings only in about 1900. Thenceforth, for most of the century, excited for meant enthusiastic about [someone’s] good fortune, prospects, etc. To link such enthusiasm to an event or object, we’d say “excited about X”; with an activity, “excited about Y-ing.”

Then, in an excited reboot, the two sorts of objects were split. Now, one is “excited to [verb]“ and “excited for [noun].” I can’t date the origin of the usages precisely, but I believe excited for, in particular, has established itself in the last twenty years–probably not long before 2000, when an Al Gore staffer was quoted as saying, “I’m ridiculously excited for the campaign to set up its war room next month.” But clearly, in the last few years it’s taken off, notably among the young. A Google Blog search for excited for yielded 14.9 million hits (excited about got 26.2 million), and none on the first two screens were in the traditional form of “excited for your [someone else’s] fortune.”

Take special note of that quote from the Al Gore staffer: “I’m ridiculously excited for the campaign to set up its war room.” This construction doesn’t quite fit into the “excited for [noun]” category that Yagoda’s been discussing. Rather, it’s a special grammatical construction, the “for-to complement”—something I’d never heard of until I consulted language maven Ben Zimmer, whose many roles include that of executive producer at Visual Thesaurus, where I’m a contributor.

Got that? Hang on; there’s more:

Only certain kinds of adjectives can take for-to complements. See page 11 of this article (item 64) for some examples of “psychological, emotive adjectives” that fit the construction (“anxious,” “ready,” “willing,” etc.).

So the question is, can “excited” join this class? I don’t see why not, since it matches other participial adjectives one finds in this construction: “delighted,” “pleased,” “inclined,” “thrilled,” etc. Some more discussion by Anna Wierzbicka here – she notes that the construction favors “imaginary, hypothetical contexts over ‘real’ ones.”

I’m impressed (and grateful) for this learned explanation. Still, I’m not convinced that the Dove One Shower Challenge represents an “imaginary, hypothetical context.” I had, after all, requested the sample; it was right there in front of me; I certainly intended to use it, at least for the specified One Shower.

I went looking for more examples of “excited for you to take” in marketing communications. I found plenty, some of which sound hopeful, most of which are poorly written, but none of which are particularly imaginary:

Which brings me away from grammar and back to the subject of excitement, which I’m beginning to suspect is the new passion. It is, in other words, overused to the brink of meaninglessness.

Here are some recent examples of “excited for [noun],” the construction Ben Yagoda is obsessed with/by:

Here’s the grammar lowdown: Traditional rules of usage require that you substitute “about” for “for” in these headlines and sentences. But I sense a nuance in “excited for” that’s missing from “excited about”: the speaker or writer is signaling an event that hasn’t yet happened, so “excited about” seems premature. One of Yagoda’s commenters, Michael Bench-Capon, may have nailed it: “You can be excited about the World Cup during the World Cup, but maybe you’d only be excited for it before it starts.”

Good point. But while for many people the advent of World Cup evokes intense emotion, in most other instances “excited” is overkill.

Moreover, in the case of Dove Deep Moisture Body Wash, the advertiser’s excitement is beside the point. Who believes—or cares—that “we,” a faceless subsidiary of Unilever, are excited, titillated, or even just mildly interested? Dove is a corporation; it doesn’t have emotions.** The line isn’t engaging or credible, and it’s not a call to action. The space wasted by “We’re excited for you to take” could have been used to say something compelling or clever, or at least relevant to the reader.

Memo to advertisers: your most effective slogan is not about you. It’s about your customers.

And now, if you’ll excuse me, I’m going to take a shower.

Bonus prepositional question: What do you say about “advocate against”—as in “Clintons Advocate Against Elephant Poaching” or “a dedicated advocate against the War on Drugs”? A retired editor of the Winston-Salem Journal says “advocate against” is “impossible,” and etymologically speaking he’s right. But with so many people advocating for “advocate against,” is it time to change the rule?

* There’s also the ambiguity of “One Shower Challenge,” which, as Andrew Nahem facetiously pointed out, could mean “We challenge you to take no more than one shower [per week, month, quarter, etc.].”

Posted at 07:11 AM in Advertising, Beauty, Grammar, Usage, Writing | Permalink

It doesn't sound off to me at all. Putting aside the question of overexcitement, how else could they word it—"We're excited about the prospect of your taking a shower"?

Karen: The mistake is assuming anyone cares whether the provider of the free sample is excited. The focus needs to be on the customer and the benefit: "Take the challenge--feel the difference!" or "Softer, smoother skin after just one shower!"

Karen: I'm willing (but far from excited) to accept "excited for you to" as grammatical, per Ben Zimmer's argument. The point of this post is to highlight the construction's relative newness and surge in popularity. I don't like it, I won't use it myself, and I might protest if I see it overused, but I'm not calling the cops.

I actually really dislike that construction because it HAS sneaked into common conversation - and it's chicken-or-egg - are we mimicking advertising, or are they simply echoing the more relaxed attitudes toward grammar?

And, I don't know if it's just the turn of mind that I have or what, but I IMMEDIATELY blinked in surprise at the ad, thinking it was guaranteeing some sort of cleanliness sticking around with ONE SHOWER a week or something, much like the current push in some beauty circles to wash hair that often. Now, from a mere bodywash (potentially containing singular nutria), that would indeed be quite a feat.