« Word of the Week: Titch | Main | How Specialtys Got Its (Oddly Punctuated) Name »

Today is National Punctuation Day, a semi-whimsical holiday invented in 2004 by journalist and marketing guy Jeff Rubin. I leave it to others to wail over missing commas and misplaced apostrophes. I celebrate in my own way: by recognizing creative, quirky, and mysterious punctuation in logos, brand names, and marketing communication. (Check this space on Friday for another story about a mysteriously punctuated brand name!)

I have no idea what that means. I do know that it’s people’s, people. 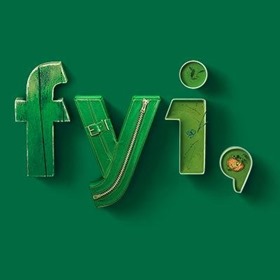 “The comma is always a lighter hue and alludes to the idea that there is always something more on FYI.” – Loyalkaspar, the branding agency that designed the new logo.

Additional print work was done by Los Angeles agency And Company. Yes, that is its name.

And Company has its own punctuation story: 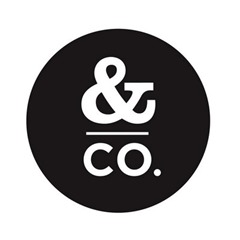 Via Brand New, which had this to say about “FYI,”:

The name of the new channel is certainly catchy. Not only does it work on the same level as other popular cable channels like AMC, TNT, FX, TBS in that it’s an acronym but it also works as lexicon commonly used in verbal and written communication when saying “for your information” proves to time-consuming.

The name is fine. The comma is annoying.

I’d somehow missed the news that in late 2013 Verizon introduced a tablet device named for a punctuation mark: the Ellipsis. 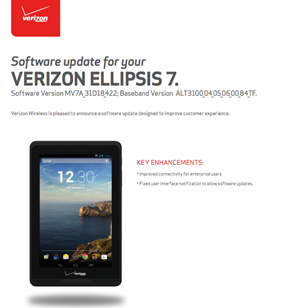 “Ellipsis”--“a series of dots that usually indicates the intentional omission of a word, sentence, or whole section of a text without altering its meaning”—comes from a Greek word meaning “omission.” Maybe Verizon was thinking of ellipse or eclipse. Honestly, I have no idea.

Speaking of ellipses, Language Log recently considered their hidden meaning. Are the three dots a marker of melancholy? Confusion? Exasperation? Advanced age? Be sure to read the comments.

This bath mat from InterDesign is called the iDry Mat!—their exclamation point, not mine. I have no idea why it’s there, but it took me an absurdly long time to stop seeing the “i” as a Spanish-style inverted exclamation mark. 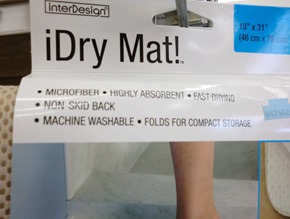 In her National Punctuation Day roundup for Time, Katy Steinmetz notes that “Exclamation marks are becoming harder to avoid, for those who would like to avoid them.” Why? “Because people need something to fill the gaps left by informative cues we get only in face-to-face communication—the raised brows, the wide eyes, the smile.”

Not sure what this has to do with bath mats, but hey! Whatever!

Some punctuation says “Get with the program(ming).”

sf.citi stands for San Francisco Citizens Initiative for Technology and Innovation. I asked my Twitter followers how they interpreted the logo and I got various answers: “Looks like source code.” “The parentheses signal that a variable is being declared: many possible values, only one operation.” I also learned that SF is a generic object-oriented programming language (although that may not be relevant here). Charles Hill (Dustbury) probably hit the nail on the head when he said the logo is meant to convey “We can handle it, whatever it is.”

One of sf.citi’s projects is Circle the Schools. 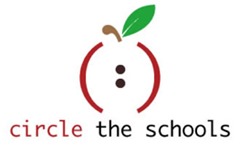 It looks like source code. But sometimes an apple is just an apple.

Ding*—yes, Ding-with-an-asterisk—is the new name of Ezetop, a service that allows owners of pre-paid mobile phones to add credit (in UK parlance, “to top up”). (Ezetop remains the name of the Irish parent company.)

Not to be confused with Bing, of course.

Brand New once again found the name “quite catchy”: “It sounds like you just won a prize—ding!” But a few commenters pointed out that the asterisk should have six points “like the star key on a phone.”

As for me, I find it irksome that “top up” is hyphenated so randomly on the website. The verb should be hyphenless (but isn’t, except when it is).

Is it co-worker or coworker? June Casagrande of Grammar Underground lays down the (short) line:

Perhaps it’s my AP Style background, but I greatly – greatly -- prefer “co-worker.” Without the hyphen, the first thing I see is “cow.” The whole word looks, at a glance, like it’s pronounced “cow irker.” I’ve worked with a lot of people over the years, and as far as I know, none of them has a history of harassing cattle.

Speaking of confused punctuation, Non Talbot Wels (that’s his real name) tweeted this photo of a Pepsi Next promotion: 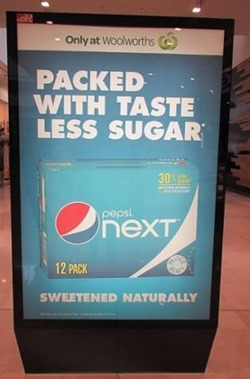 Taste less sugar? Tasteless sugar? A period or dash at the end of the second line would have been in excellent taste.

Looking for a suitable gift for NPD 2015? For $125, Art We Heart will sell you an Ampersand Garden wall hanging, handmade in Los Angeles of air plants, wood, and moss and measuring about 11 inches square. 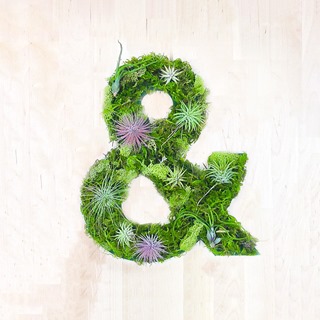 I can't be the only one who sees Ding* and looks at the bottom of the page expecting to see *Dong.

I've seen "cow orker" treated as a jocular re-spelling (like the less jocular "the rapist" for "therapist) but had imagined "order" as rhyming with "corker." One also should not forget that annual sporting event, the Superb Owl.