Further journeyings in the land of the blend:

Kidvasion is a month-long promotion of the San Diego Tourism Authority.

This blend is what The Name Inspector would call awkwordplay: a mismatch in syllable emphasis. In one of the blended words, invasion, the stress falls on the second syllable; but in the compound it’s “kid” that needs to be emphasized.

I’m not entirely certain, but I think Waffullicious, coined by IHOP to describe the chain’s limited-time waffle offering (waffering?), is a three-way: waffle plus full plus delicious. 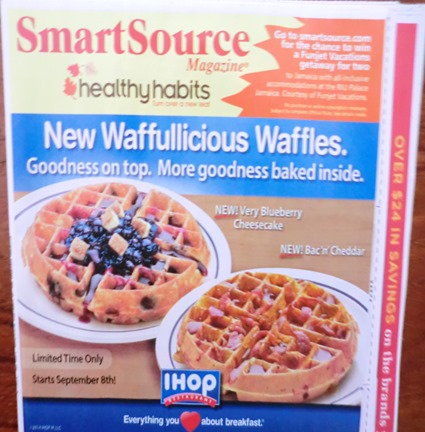 Our traditional thick, crisp Belgian waffle with chunks of chopped hickory-smoked bacon and gooey cheddar cheese baked right in, then topped with more bacon for a savory waffle experience unlike any other.

The Very Blueberry version is stuffed with blueberries and cheesecake.

So what we have here are waffles full of delicious. I’d put the emphasis (semantic, not syllabic) on full: According to the Impulsive Buy blog, each order—that’s a single waffle—contains between 750 and 820 calories.

At least the Waffullicious name goes down smoothly.

Affordaganic, a combination of affordable and organic, is Rodale’s contribution to the blendfest. 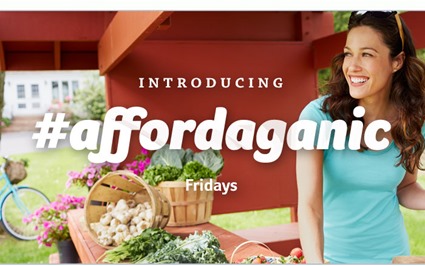 Until I discovered “affordaganic” via a Twitter hashtag, I hadn’t known that Rodale, Inc., the 84-year-old healthy-living publisher, had launched what they called an “eco-luxury online retail store.” Rodale’s has an apostrophe-s to distinguish it from the parent company. I’m puzzled by that “luxury” descriptor: I’d call the clothing, home, and beauty offerings moderately priced (a lip-balm trio for $12, dresses for $55 and $65, bras—mostly of the sport variety—for under $50).

“Affordaganic” sounds forced to me, and the whole concept of “affordability” is wobbly and subjective. If you have a lot of money, everything’s affordable; if you have none, nothing is.

At least they’re only trotting it out on Fridays.

Fun fact: Since its founding in 1930, Rodale has been based in Emmaus, Pennsylvania, a town founded in 1759 by Moravian immigrants whose name has a Biblical antecedent. In the New Testament, Emmaus—Hammat in Hebrew, Imwas in Arabic—is where Jesus is said to have appeared to two of his followers after his resurrection. In Hebrew, the word means “warm spring.” Two other Pennsylvania towns founded by Moravians have Biblical names: Bethlehem and Nazareth. Emmaus, PA, is pronounced eh-MAY-us.

Posted at 06:50 AM in Food and Drink, Portmanteaus, Retail, Travel | Permalink

As always, I love your writing and look forward to receiving the news feed!