« How Cortana Got Its Name | Main | Word of the Week: Single-Sole »

Name in the Wild: Vichy

The skincare brand Vichy was new to me when I spotted it at Walgreen’s last weekend. 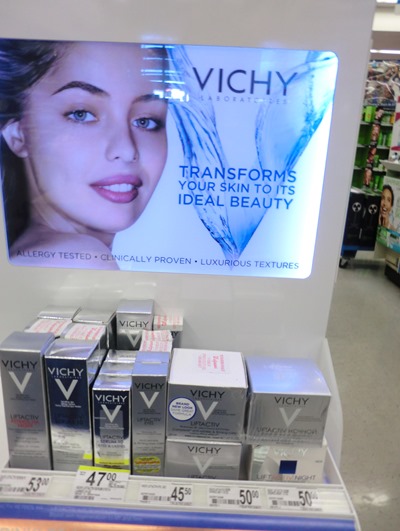 Vichy display at Walgreen’s. The headline strikes me as not quite idiomatic: “transforms” generally doesn’t take “to.”

But Vichy is not a new brand: it was born in 1931, when a Parisian cosmetics manufacturer, George Guérin, was treated by Dr. Prosper Haller, at the spa in Vichy, France. The two men then created a line of skincare products that used water from the famous Vichy spring. In 1955, the company was bought by L’Oréal, which still owns the brand and which in 2014 is the world’s largest cosmetics company. (L’Oréal brands include Lancôme, Maybelline, Kiehl’s, Garnier, and Clarisonic.)

Here’s where we take a detour into 20th-century European history.

For students of World War II, or for anyone who’s watched Casablanca or Marcel Ophüls’s The Sorrow and the Pity, “Vichy” is not a neutral place name.* Beginning with the French surrender in June 1940, Vichy was the administrative center of German-occupied France and became shorthand for the pro-Nazi French regime. According to the Jewish Virtual Library, “While officially neutral in the war, Vichy actively collaborated with the Nazis, including, to some degree, with their racial policies.”

Bygones, you say? Not so fast.

The founder of L’Oréal, Eugène Schueller (1881-1957), provided financial support for a violent French fascist group, La Cagoule (“the hood”). After the war, one member of the group, Jacques Correze, became chairman of L’Oréal’s U.S. marketing arm. Another member of the group, André Bettencourt, married Schueller’s daughter, Liliane. (Their daughter married a Jew, and a son from that marriage, Jean-Victor Meyers, now sits on L’Oréal’s board.) Nor did L’Oréal make public amends after the war: In Bitter Scent: The Case of L’Oréal, Nazis, and the Arab Boycott (1996), the Israeli historian Michael Bar-Zohar tells the story of how company director Jean Frydman**, a Jew and a hero of the French Resistance, was forced off L’Oréal’s board in 1989 to satisfy demands by the Arab League.

And, of course, L’Oréal keeps the Vichy name alive on its high-priced (for a drugstore brand) skincare products.

One has to assume that L’Oréal thinks the upside of the name (brand equity, pleasant sonic qualities) outweighs the downside (unsavory history, the effort and expense of a name change).*** As for me, I’m with Captain Renault. 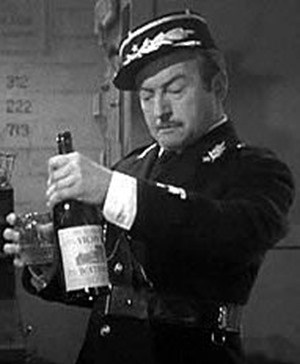 * Also see L'Œil de Vichy (“The Eye of Vichy”), Claude Chabrol’s 1993 documentary made up of pro-Nazi propaganda produced by the Vichy regime between 1940 and 1944. You can watch the film in its entirety on YouTube.

** Not related to your author, as far as I know.

*** May a more appropriate tagline than “Your Ideal Skin” would help. How about “Your Beauty Collaborator”? Or “Surrender to Beautiful Skin”? Or even—cue the Marseillaise and the fog-shrouded black-and-white airport scene!—“This Could Be the Beginning of a Beautiful Friendship.”

Posted at 05:55 AM in Beauty, French, History, In the Wild, Naming | Permalink

"Your Beauty Collaborator"? Love it.

Hah. Your Skin bCollaborator - has a nice, edged ring to it.
I am repeatedly amazed by how short our memory of history is - there is no "bygones" on this one, no indeed.

What will be next ? Some "Quisling" branded product?