« On the Visual Thesaurus: The Revival of Apothecary | Main | Lets Pumpkin Again »

I spotted a seasonable new verb in the window of Noah’s New York Bagels in Montclair Village (Oakland): 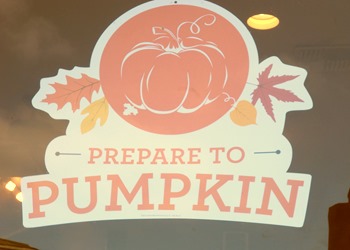 Unlike the store window, the company website refrains from squash-verbing, or verb-squashing: it simply and modestly claims that “Pumpkin Is Here.” The bounty includes pumpkin bagels, pumpkin shmear, pumpkin muffins, and something called pumpkin clusters.

You may have noticed that everyone everywhere is prepared to pumpkin: it’s become the dominant fall flavor. And that may have puzzled you, because pumpkin isn’t really a flavor at all—the squash itself is nutritious but bland. So what constitutes “pumpkin flavor,” and what’s responsible for all this pumpkinifying?

According to an article published this week in Fortune (“Is Pumpkin Spice the Ultimate Aphrodisiac?”), Starbucks may have started the trend with its Pumpkin Spice Latte, known to fans as PSL. The company claims that the drink, which was introduced in 2003, is its “most popular seasonal beverage of all time.” You may or may not be surprised to learn that there is no actual pumpkin in the beverage; essence of pumpkin is evoked by cinnamon, ginger, nutmeg, cloves, and sugar, as well as a dose of unspecified artificial flavors. 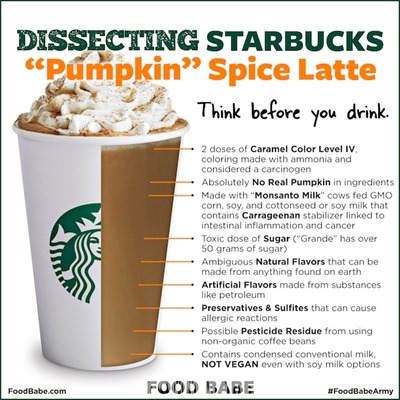 Eleven years of Starbucks success has inspired a lot of imitators. From the Fortune article:

Just about anything that can have a pumpkin variety now does, or soon will: Oreos, Milano cookies, M&Ms, yogurt, marshmallows, gum, oatmeal, Eggo waffles. There was even buzz last week, which turned out to be a hoax, about a pumpkin spice condom. The fact that this fake news gained so much traction is a sign of how sexy the subject has become.

Why pumpkin (or “pumpkin”) and not another seasonal flavor, like apple pie or (my own preference) maple syrup? The Fortune reporter talked to Alan Hirsch, founder and director of the Smell & Taste Treatment and Research Foundation in Chicago, who has researched the effects of scents on sexual arousal in male volunteers. (Yes, only males.) The results:

For the big picture on pumpkin-flavored foodstuffs, check out Impulsive Buy, whose dogged bloggers track down and consume all manner of crap in the name of consumer enlightenment. Impulsive Buy’s pumpkin archives include posts on pumpkin spice chips (from Pringles), tortilla chips (from Food Should Taste Good and Garden of Eatin’), soymilk (from Silk), pop-tarts (from Kellogg’s), and sparkling juice “cocktail” (from Welch’s), as well as all of the snacks cited by Fortune.

UPDATE: Humor writer Nancy Davis Kho on the pumpkin industrial complex: “All of a sudden, pumpkin is as ubiquitous as open letters to Miley Cyrus.”

Posted at 05:24 AM in Anthimeria, Food and Drink, Trends | Permalink

Maple syrup is a spring product, but somehow the flavor has become associated with autumn, at least in the U.S. Different in Canada, maybe?

The maple=fall association may well be connected to the autumn leaves, which can be very colorful (depending on the kind of maple) and of course are favorites for primary school art projects. (I grew up in a town that styled itself The Maple City.) Also, Q., I would never have hyphenated pumpkin-pie (or en-dash it, which would suggest “spice latte” was a thing). For me pumpkin pie was always a fixed compound that can stand alone. But now that Starbucks is confusing everyone, maybe I'll have to hyphenate after all.

Your photo from the village brought to mind that you might well appreciate this recently released pro-Oakland anthem by a local Psychobilly band, the Phenomenauts : http://youtu.be/9aGvyIzrbnc (warning: substantive earworm danger). There are lot's of local institutions shouted out in the final chorus ("The Crucible!")

In regards, the Pumpkinning of the season, Dorkly made a lovely connection to Game of Thrones: http://www.dorkly.com/post/68296/the-surest-sign-winter-is-coming .