How Specialty’s Got Its (Oddly Punctuated) Name

Here’s a late addition to my National Punctuation Day roundup of quirkily punctuated brand names. This one comes with such a good story that I decided to give it its own post.

Specialty’s Café and Bakery, which has 48 locations in California, Washington, and Illinois, has been puzzling proofreaders and other persnickety types since its founding in 1986. 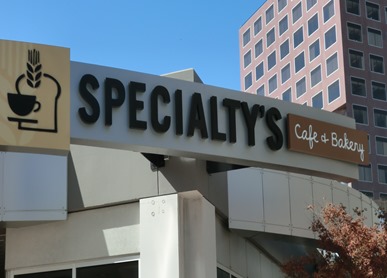 Sure, we love the giant cookies, the fresh focaccia, and the meal-in-a-bowl soups. But that apostrophe! It’s wrong, right? Unless, of course, there was a Jane Specialty in the company’s past, and the possessive apostrophe signifies that the chain is named for her. Unlikely, sure. But stranger things have happened.

I’m a former journalist, and I never let idle speculation take the place of investigation. So I sent an email via Specialty’s website, hoping (but not really expecting) that someone would set me straight.

To my surprise, a few days later I received a phone call (a phone call!) from Sean Reiter, vice president of branding and sales at Specialty’s. “I understand you want to know about our … unique name,” he said, chuckling. And then he told me this story:

The company started in a familiar way: garage, two founders, maxed-out credit cards. The name the founders chose was Specialties—the correctly spelled plural. (More on that choice later.) “But when they went to apply for a business license,” Sean told me, “they discovered that spelling was taken, so they changed it to Specialty’s.” (More on that in a bit, too.)

I’m not the first person to ask about the spelling, Sean added. “We get a fair number of inquiries. In fact, I used to send out a response that read, ‘We’s don’t understand’s the problem’s!’”

Then he told me another spelling story.

Specialty’s corporate offices are in Pleasanton, California, about 25 miles east of Oakland and the site of the Alameda County Fair. The town was founded in 1894 by John W. Kottinger, an Alameda County justice of the peace, who named it in honor of his friend, a Civil War-era general named Alfred Pleasonton. A typographical error by a U.S. Post Office employee turned “Pleasonton” into “Pleasanton.”

What better home for a misspelled company than a misspelled town? Clearly, I told Sean, Specialty’s and Pleasanton are a perfect match. And then we both laughed.

Specialty’s is doing so well, and Sean Reiter was so good-humored and generous with his time, that it seems churlish to nitpick further. But names are my game, so I am obliged to point out some lessons to be learned from this story:

1. Whether it’s spelled Specialties or Specialty’s, it’s not a very good name. It falls somewhere between generic and descriptive; it fails to suggest a benefit or evoke an emotion. It certainly doesn’t say “delicious,” “speedy,” “fresh,” or any of the other qualities we’ve come to expect from the chain. “Specialness” is not a distinctive claim; all of Specialty’s competitors can make it.

2. Creative spelling does not make a name more protectable in the eyes of the law. It doesn’t even make it more distinctive to your customers.

3. It’s never a good idea to become so attached to one name that you resort to strange spellings in order to hang onto it. Far better to have a batch of runners-up that you can fall back on if your first choice is unavailable. Remember, you’re not looking for a love match, you’re looking for an arranged marriage.

On the other hand, I’m also obliged to tell you that there are companies with long and successful histories whose names resulted from misspellings. Ski-Doo (a misspelling of Ski-Dog), Lands’ End (a misplaced apostrophe) and Lane Bryant (a misspelling of the founder’s first name) are three that come to mind.

Now, if you’ll excuse me, I think I’ll have a cookie. Or maybe three cookie’s.

Posted at 07:44 AM in Food and Drink, How They Got That Name, Naming, Punctuation, Spelling | Permalink