How Cortana Got Its Name

In April, Microsoft announced the launch of Cortana, its new digital personal assistant for Windows Phone 8.1. 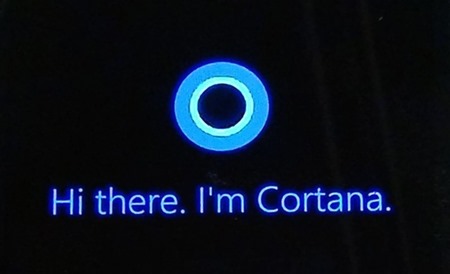 Like the iPhone’s Siri, Cortana takes feminine pronouns. Some examples (cute or smarmy, depending on your perspective) from the Windows Phone website:

“Before you can get all the goodies Cortana has to offer, you’ll need to make sure she’s on. If you like, you can help her get to know you a little better, too.”

“If you turn Cortana on, for her to work for you, Microsoft collects and uses your location, contacts, voice input, info from email and text messages, browser history, search history, calendar details, and other info.”

“She’ll ask if you mind answering a few questions—this will help her understand what’s important to you and what information she should bring to your attention.”

“Cortana” will ring a bell for anyone familiar with Xbox games—it’s the name of a character, voiced by actress Jen Taylor, introduced in Halo: Combat Evolved, the first-person-shooter game published in 2001 by Microsoft Game Studios. In that game and its many sequels, Cortana is an artificial-intelligence construct that resides as a neural implant in the battle armor of the protagonist, Master Chief Petty Officer John-117.

Cortana as she appears in Halo 4. Source: Wikipedia.

Since “Cortana” was already part of the extended Microsoft brand universe, it was quickly adopted as the codename for the digital personal assistant, wrote Tom Warren in article published in April in the online tech-culture publication The Verge. “We didn’t intend for it to be the actual product name from the beginning,” Windows Phone product manager Marcus Ash told Warren. And it very nearly wasn’t:

The fact Cortana exists simply as Cortana, and not some marketing buzz like “Microsoft Personal Digital Assistant Home Premium” is surprising given Microsoft’s history of naming products. Up until a few weeks ago, it was hit and miss whether Cortana would be the final name. It could have been Naomi, Alyx, or a number of other suggestions, but leaks and a petition to use the Cortana name helped sway Microsoft’s decision.

The Halo connection has been deliberately exploited: the voice actor from the game, Jen Taylor, also voices the digital assistant. The strategy “meshes well with Microsoft’s main goal for the product: recreate a real personal assistant without being too creepy,” Warren wrote.

But the story of the Cortana name goes beyond Halo.

A lower-case cortana—sometimes spelled curtana—is a type of sword with a blunted or broken end, also known as a “sword of mercy.” The word entered English in the 15th century, adapted from cortain, the name of the sword carried by Roland in the early medieval French epic poem La Chanson de Roland; another character in the Roland poem, Ogier the Dane, carries a similar sword named Curtana. Cortana, curtana, and cortain are all related to Latin curtus (“short”). According to “The Modern Mythos,” an essay by Jill MacKay in Halo Effect: An Unauthorized Look at the Most Successful Video Game of All Time, the game’s allusion to these medieval sources is deliberate. (The name of another Halo AI character, Marathon 2’s Durandal, is a slight variation of Durendal, another of Roland’s legendary swords.)

Curtanas are still seen in the modern era, if only symbolically: in the British coronation ceremony, the monarch carries a curtana. 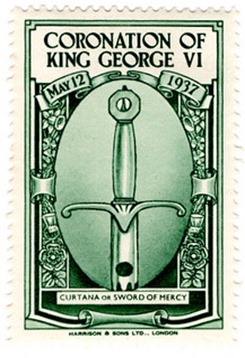 A 1935 revenue stamp (UK) depicting the ‘'curtana or sword of mercy” carried by King George VI during his coronation. Via I.B. RedGuy.

Cortana is also the name of a paleo-gastropod discovered in Brazil and described in a 2013 scientific paper:

The name was taken from a character of the science fiction franchise "Halo", and alludes to the convoluted markings on the shell surface of the holotype of Cortana carvalhoi. Grammatical gender: feminine.

Watch a demonstration of “50 things Cortana can do right now” (Gizmodo).

UPDATE: By sheer coincidence, Nancy Man, who blogs about baby names at Nancy.cc, published a post today about Cortana, which debuted on the U.S. baby-name charts in 2008.

Posted at 06:41 AM in Contests, Puzzles & Games, History, How They Got That Name, Poetry, Science, Technology | Permalink

Hmm ... well, as women's names go, at least it's not Britney. But the "-ana" suffix seems so dated; it makes me think of brands like Ipana or Porcelana. I guess if I'm comparing Siri to Cortana I conclude that Siri is insufferably smug and Cortana is unduly labored - pretty much the general Apple v. Microsoft picture anyway.